Even with a considerable number of network nodes, FANTOM's technology is intended to provide potentially unlimited scalability and can manage thousands of transactions per second. Figure 1 below shows the time to finality of different blockchain networks.

Founded by the South Korean computer scientist Dr Ahn Byung Ik, the team behind Fantom has extensive experience in full-stack blockchain development. Michael Kong is the current CEO of the platform.

The project aims to attract developers looking to deploy their decentralized solutions. According to the Fantom whitepaper, the mission is to “grant compatibility between all transaction bodies around the world.” It also aims to become the IT backbone of smart cities around the world.

After raising $40M in 2018 Fantom has raised more capital this year. Among the investors are HyperChain Capital ($15M) as well as Alameda Research ($35M). The investment by Alameda research especially supports Fantoms mission to build out a cross chain ecosystem.

Fantom is integrated with leading projects like Raven, Chainlink, Band Protocol and Graph Indexing Protocol. Firebird finance recently announced the Firebird SwapV2 integration with Fantom. The announcement could result in a possible bull market for Fantom over the coming weeks.

Other layer 1 blockchain solutions include networks such as Ethereum, Terra, and Solana. If Fantom also decides to further build out its partnership with Smart Cities then it could also be a competitor of IOTA and Helium for example. 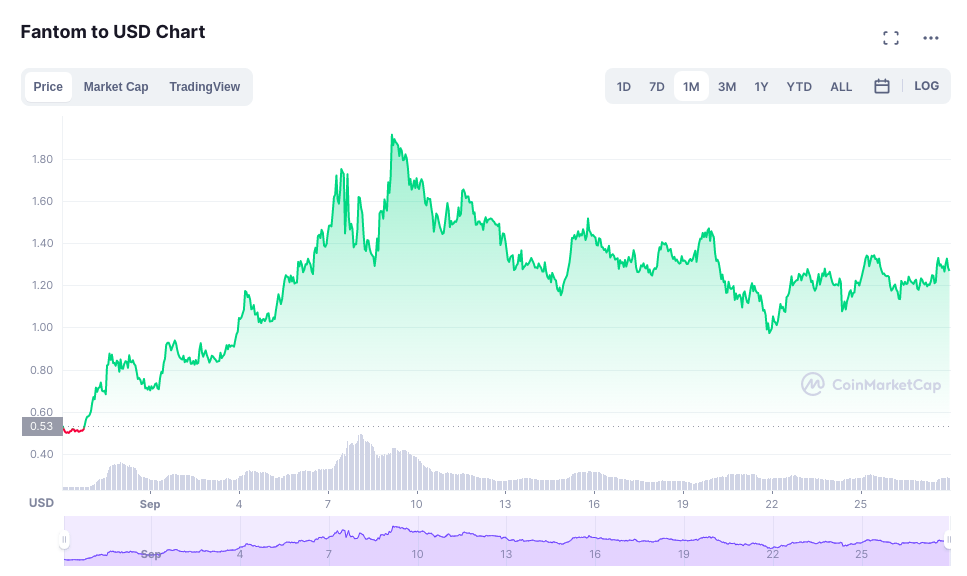 The one-month price movements for Fantom (as shown in Figure 2) has been pretty exciting with a gain of 160%. The price of Fantom is currently at 1.30 USD with a market cap of $3.27B. The current price of FTM is 35% below the all time high of 1.93 USD. The trading view for FTM with a 28 day Simple Moving Average (SMA) and 56 day SMA as seen in Figure 3, suggests a possible trend reversal resulting from the global crypto crash over the past two weeks. Investors may find this as a lucrative entry spot. 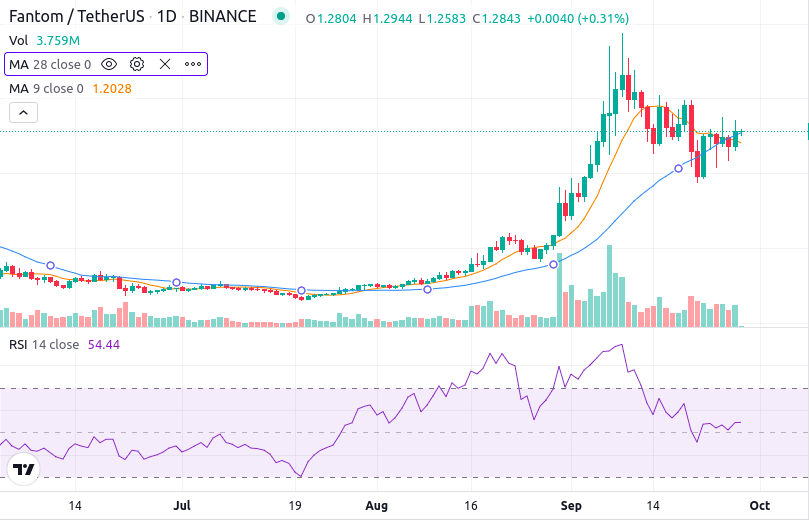 The 3-month price movements for FTM shows steady growth from the 20th of July to early September. Investments over the three months would have resulted in a massive gain of 550%. The dip during the second and third week of September could be seen as the perfect pitching time to invest in FTM. There are more than 36k FTM Holders. FTM market cap today stands at $3.3B with a circulating supply of 2.5B tokens.

With the 28 day SMA crossing over the 9 day SMA, a trend reversal is on the cards, possibly opening up an investor-friendly environment. The Relative Strength Index (RSI) values indicate a possible sell-off during early September, and the current RSI value of 53, is indicating the coin is underbought even if it’s performing well. This looks to be the perfect time to pick up and hold some FTM tokens. The Fantom Foundation has announced a 370 Million FTM incentive programme for builders.

FTM is available on all major cryptocurrency exchanges like Binance, Gemini, Bitfinex, Uniswap. You can find the entire list of exchanges that support FTM trading here.

FTM has been on our radar since this spring and it keeps evolving and growing. As more applications are being built driven by generous incentives, Fantom will have to proof that it can keep up the momentum and “stickiness” of users to be a viable alternative to other Blockchains. It’s partnership with Solana can prove vital in this instance.

Want to find out more emerging tokens? Try out Momentum Pairs for free!

The information provided on this website by Novum Insights is for informational purposes only, we make no warranties of any kind, express or implied, about the completeness, accuracy, reliability, suitability or availability with respect to the website or the information, products, services, or related graphics contained on the website for any purpose. Any reliance you place on such information is therefore strictly at your own risk. None of the information provided is intended nor should be relied upon for the purposes of investment.The Emerging Tokens Alert and the Novum Blog 'defi-calculator', including the 'top ten' are based on constitute entirely estimated historical returns which provide no guarantee, promise or calculation of potential future returns or losses. In addition, all of the assets displayed and shown on the website are highly volatile and risky.