NuCypher is a decentralized network of nodes that perform proxy re-encryption (PRE) for public blockchains. Built as a L2 on Ethereum, NuCypher enables users to share private data securely between multiple participants in public blockchain networks.

NuCypher was founded in 2015 by MacLane Wilkison and Michael Egorov, the founder of Curve. NuCypher was a member of the leading accelerator Y Combinator in 2016 and has raised more than $15M in total. Investors include Polychain Capital, Fenbushi Capital, FBG Capital and more. 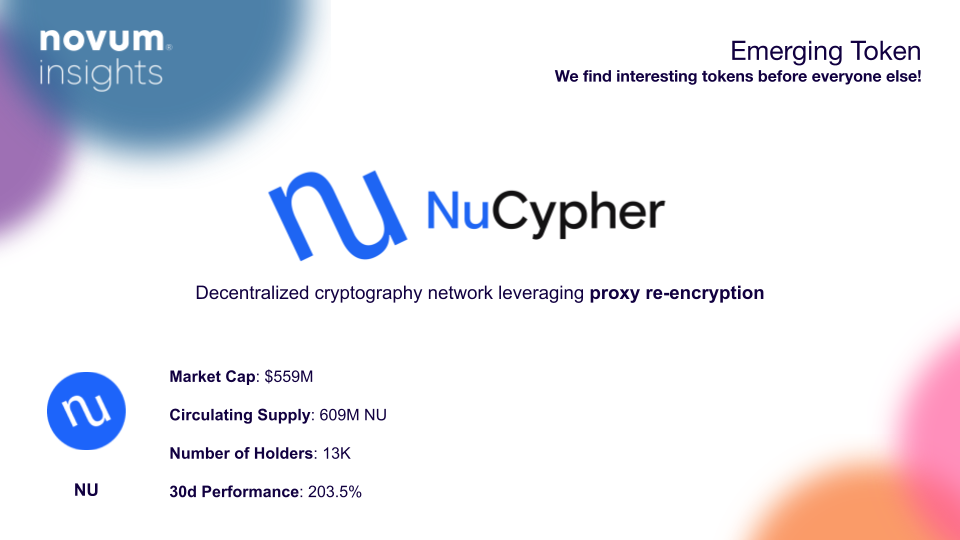 NuCypher allows a secure transfer of sensitive data on public consensus networks via proxy re-encryption (PRE). PRE is a key encryption technology that enables a proxy entity to transform ciphertext data from one public key to another. Here, the proxy entity will not retrieve any underlying messages(plaintexts) or secret(private) keys.

The illustration below explains how PRE works. 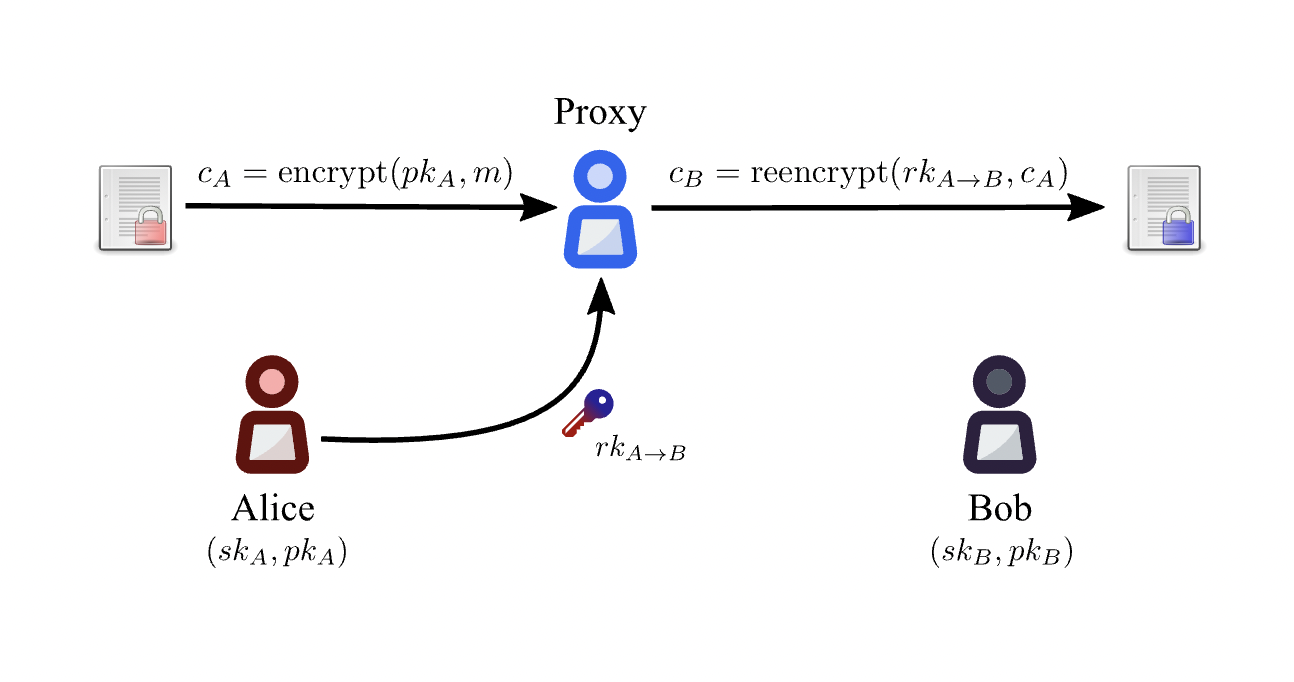 Alice is the data owner and Bob is the recipient of the data.

Alice wants to delegate the decryption rights to Bob who has the symmetric key pair (pkB, skB).

The re-encryption key generated then transforms cA into cB.

Unlike most blockchain systems where sharing encrypted data with multiple recipients requires issuing multiple encryption keys, NuCypher’s PRE allows the proxy entity to re-encrypt data with the recipient’s public key. This enables the sender to create a single encryption key for multiple recipients. Thus the technology is well suited for distributed networks such as blockchain, N-to-N communication. For example your health encrypted health data can be stored in decentralized storage and can be accessed by an approved third-party upon your re-encryption token generation. In an enterprise setting, confidential files can only be shared amongst approved parties. The access can also be revoked manually or automatically according to pre-specified conditions (e.g. time-based, behaviour-based).

NuCypher’s native token NU is used to reward miners who run re-encryption nodes. Data owners who want to generate re-encryption keys pay in NU for its services. The miners can be paid by either data owners or the users of the data. To run nodes, miners have to stake NU as collateral. This is to protect the network against miner’s malicious behaviour.

As NuCypher’s success depends on many nodes entering the system to perform re-encryption, NuCypher designed its token economics to encourage long-term staking. The minimum staking period is 1 month.

NU token is expecting a big change in its tokenonomics due to a protocol merger with Keep, another privacy-centered solution for public blockchains. NuCypher and Keep Network will merge as Threshold Network under the code name KEaNU, and the proposal has received the greenlight by the respective DAOs this June. Through the merger, two companies look to consolidate their shared vision. tBTC v2 will launch on the newly merged protocol. tBTC is a wrapped BTC designed by the Keep team. tBTC allows permissionless minting of BTC on Ethereum without using the centralized custodian model WBTC is using. It will leverage NuCypher’s cryptography technology.

The final proposal for the merger is summarized below. 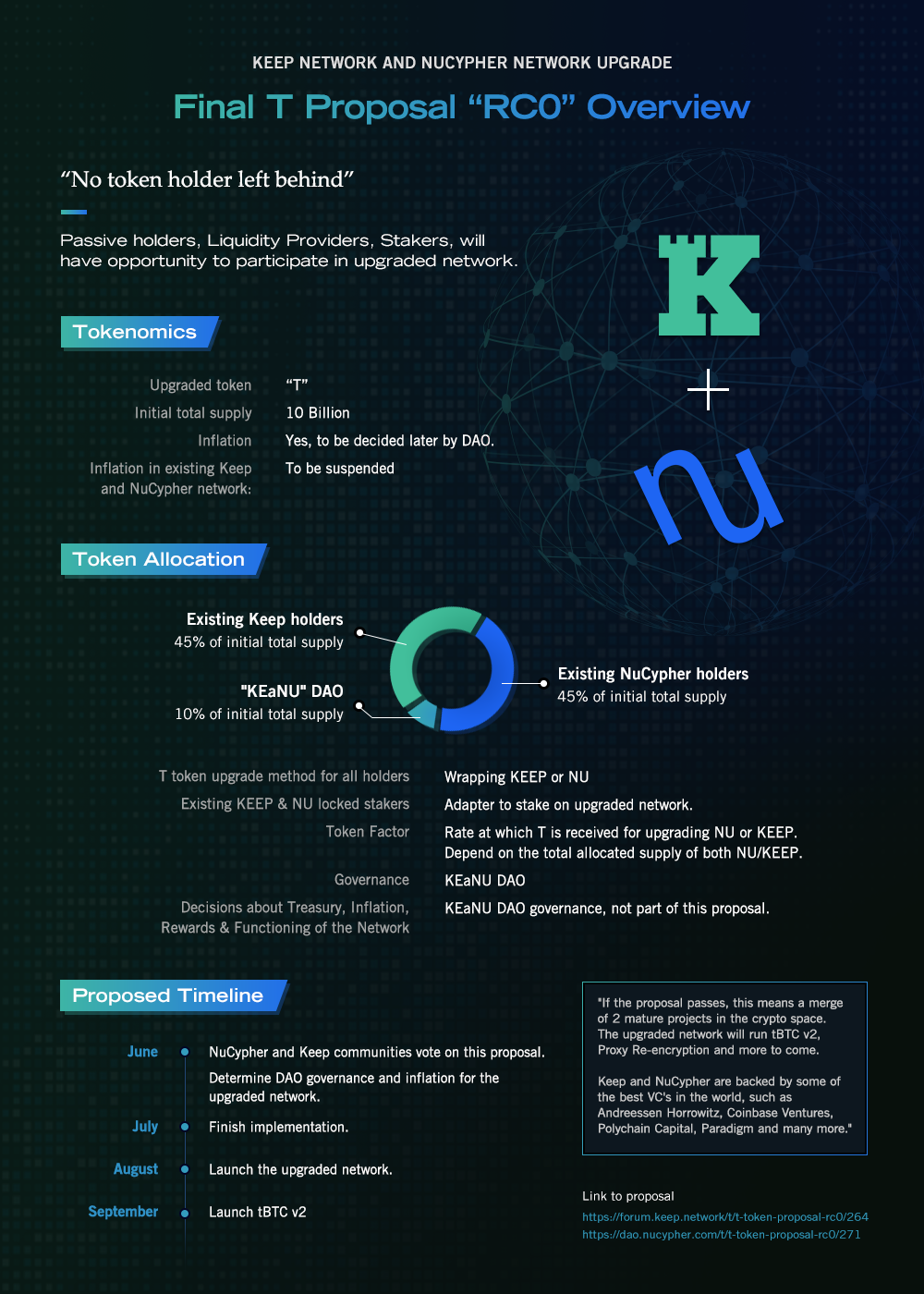 The initial total token supply of Threshold Network’s T token is set at 10 billion tokens. 45% of the total supply is for existing Keep and NU holders respectively. 1 billion T tokens are allocated to “KEaNU” DAO. Following the merger, inflation in NU and Keep will be suspended. To learn about the KEaNU DAO governance structure and detailed T emissions schedule, see NU Cypher’s DAO, Discord and Notion.

NU has shown a 203.5% price increase in the past 30 days. The current market cap and price of NU stand at $559M and $0.92 respectively. The trading volume in the past 24h decreased by 10%. The current 7day RSI (Relative Strength Index) value stands at 39. It went up as high as 98 two weeks ago when NU reached an all-time high ahead of updates regarding its merger with KEEP. There is currently 1.312 billion total supply of NU tokens with 609 million circulating supply. There are more than 13K NU holders.