This week we see a big price downturn in DeFi projects. Many DeFi projects logged 20% negative price change in the past 24 hours. The chart below compares the price movement of BTC and ETH and Novum’s handpicked emerging tokens. Blockchain protocols Near and Phantom outperformed BTC and ETH, the clear winner of this week is Vesper Finance. 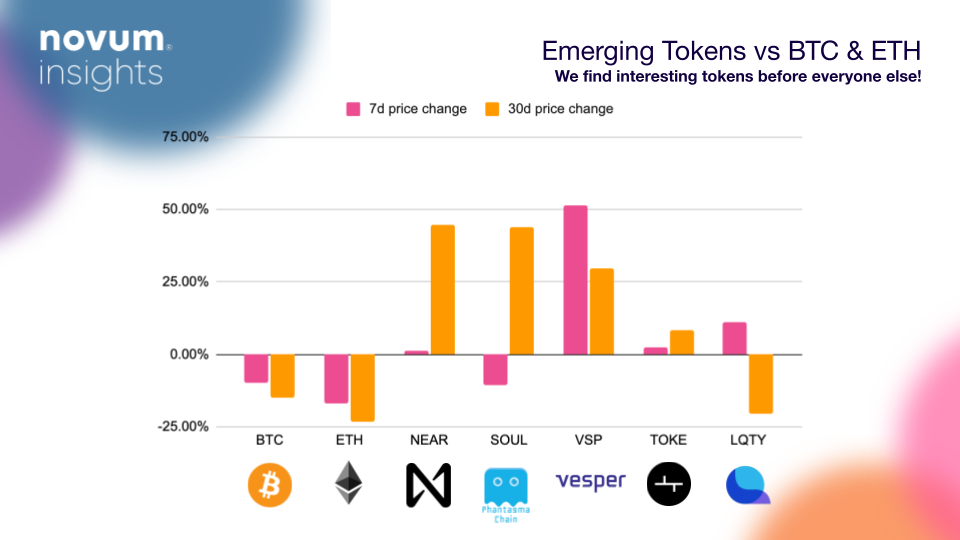 NEAR is a blockchain protocol with end-user usability at its core. NEAR Protocol is founded by Illia Polosoukhin, a former Google engineer and Alexander Skidanov, a former Microsoft software developer. With NEAR, users can create human readable account names and use Single Sign On authentication which average users are more familiar with. To tackle the scalability issue, NEAR employs sharding, which is done by splitting the network into smaller pieces, like Ethereum does. The difference is that NEAR “dynamically” splits the network nodes depending on the usage. NEAR is working on interoperability with its EVM compatible network Aurora.

As a PoS (Proof-of-Stake) blockchain, the annual inflation rate is set at 5% to reward network validators with about 90% of the inflation going to the validators. To offset the inflation, the network usage fees paid in NEAR are burned. The total supply of NEAR is set at 1 billion and the circulating supply as of writing is 607 million. NEAR had a fantastic run in the past year having increased by more than 800%. Between December 21st and 26th NEAR’s price almost doubled and that pushed its RSI and RVI up to 74 and 88 respectively. Shortly after that on Jan 4th 2022, NEAR reached its ATH. NEAR’s RSI and RVI are now at 60 and 55. The trading volume in the past 24h increased by more than 150%. This might not be the perfect time to invest in NEAR as its ATH was hit a week ago and it is now trading only below 8.1% that. However NEAR has a sound team who always has user’s accessibility in mind and definitely is one of the fastest growing blockchain ecosystems.

Vesper is a DeFi yield protocol running on Ethereum and Polygon. There is $155 million in liquidity locked in Vesper. Vesper’s Grow Pools allow users to deposit one asset and earn more of the deposited asset and Earn Pools allow users to deposit one asset and earn interest in another asset. Aggressive Grow Pools offer APYs around 7% - 30% and conservative Grow Pools offer those around 1% - 7%. The protocol fee is set around 20-25% on yield, depending on Pools. 95% of these fees generated goes to Vesper’s Treasury to be converted to VSP to be distributed to VSP stakers. vVSP (staked VSP) also represents governance rights. Supported tokens in Vesper include ETH, LINK, BTC, DAI, USDC, USDT, UNI and DPI.

VSP has a market cap of $40 million, and is currently trading at $5.15. VSP had a great run in the past week, having increased by more than 50%. The RSI is getting heated up and is now at 58, and RVI is about to cross over the 50 which means if the positive price movements continue, there is a good chance that the volatility will act favorable towards investors looking to buy VSP.

Tokemak is a decentralized liquidity protocol backed by Framework Ventures. Tokemak lets users control where the liquidity flows. There is currently $1.4 billion locked in Tokemak. There are two main actors in the protocol : liquidity providers (LPs) and liquidity directors (LDs). LPs deposit assets (single asset staking) and the assets provided are later paired and deployed as liquidity. LPs earn variable APR rewards in TOKE. LDs are the participants who stake TOKE and make votes to direct certain assets as liquidity to a preferred exchange / protocol. LDs also earn variable APR rewards in TOKE for directing liquidity. The APRs for depositing and liquidity directing range between 25% - 45% as of writing. To understand the reward logic better, read this. Tokemak’s impermanent loss mitigation strategies are also outlined here. Supported assets in Tokemak’s Token Reactor include FXS, ALCX, SUSHI, OHM, TCR, VISR, APW, FOX and SNX. Tokemak also recently launched Pair Reactors. Pair Reactors are either ETH or stablecoins. A token in Pair Reactor and a token in Token Reactor will be paired together to be deployed on various yield venues.

TOKE has a total supply of 100 million. 30% of them is allocated as rewards and will be emitted over 2 years. Tokemak has been featured in Novum Emerging Tokens three weeks ago. Since then TOKE has increased by 40%. TOKE market cap stands at $432 million and currently trading at $48.49, 39% below its ATH hit two months ago. Both RSI and RVI took a downturn and are now at 48 and 28 respectively. DeFi participants who want to control where to direct liquidity with Tokemak, this is not a bad moment to buy the dip.

Phantasma is a blockchain focused on Gaming and NFTs. Phantasma’s smart NFT solution enables NFTs to evolve over time. Or users can mix up tens of NFTs to create another NFT, like lego. Several projects launched on Phantasma including Blood Rune, Ghost Festival, Ghost Markets. Netvrk is also integrating Phantasma.

Phantasma opted for a dual token system, so the usability and utility of a token does not dilute the future share of ownership of the project. SOUL token is the governance token. Staking SOUL unlocks a lot of benefits. Stakers can participate in governance votes, earn fuel token KCAL that is used for transaction fees on Phantasma, and each staked SOUL earns 0.002 KCAL per day. Those who stake a minimum 2 SOUL tokens can claim their Phantasma names, human-readable wallet names that gained popularity via ENS.

94 million SOUL tokens were minted at launch back in 2019 with an annual inflation of 3%. SOUL currently has a circulating supply of 104 million. SOUL showed splendid growth over the past year fuelled by the NFT and metaverse frenzy, having increased by more than 3000%. SOUL’s market capitalization stands at $313 million as of writing. SOUL’s RSI has been in the range of 45 - 84 since October and is now at 53. RVI started to show a positive volatility for traders from Jan 7th this year.

Liquity is a decentralized 0% interest fee borrowing protocol that charges a one-time fee rather than variable interest rates. Users can borrow a USD-pegged stablecoin LUSD against ETH at a minimum collateralization ratio of 110%. The variable one-time borrowing fee is determined algorithmically based on the last redemption period. There is currently more than $2 billion locked in the protocol. Liquidity’s core product LUSD’s yield opportunities have grown a lot recently. Uniswap v3 liquidity management platform Visor Finance added the LUSD/ETH pair on their platform. Rari Capital included LUSD in their Fuse pools. The founder of Synthetix put out a bounty for 500 SNX for whoever deploys a working LUSD bridge to Optimism. LUSD is also included in Tokemak’s Pair Reactor.

LQTY increased by 11% in the past week and is still trading 94% below its ATH hit 9 months ago. Investors looking to buy LQTY could follow the supply growth of Liquity’s main product LUSD, which could indirectly show the adoption of Liquity, and decide whether to invest or not.