BTC and ETH both logged negative price movements in the past week. Despite the bearish market sentiment, Near and Boba raised tens of millions in funding and TON blockchain launched a $250 million ecosystem fund backed by institutional investors. One of the rising gaming guilds Perion DAO booked a double digit growth. 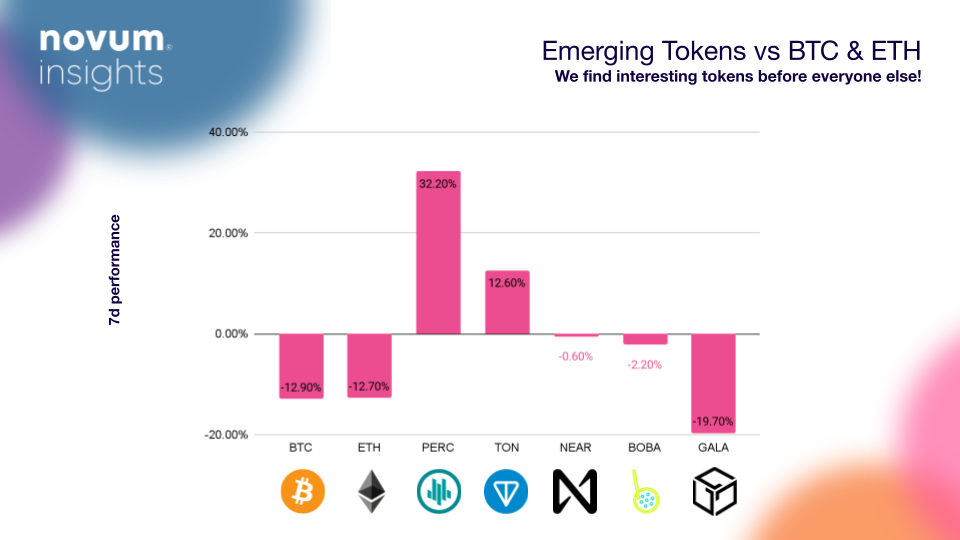 Boba Network (formerly OMGX) is a layer 2 scaling solution for Ethereum. Boba Network is an Optimistic Rollup built upon the open source Optimism project. Optimistic Rollups use fraud proofs. In this model, transactions are assumed to be valid by default, rolled up to be supplied to the main chain. Computations are run only when fraud is suspected. With decentralized infrastructure solutions company Enya as a key contributor to the project, Boba Network supports cheap transaction costs, fast exit and NFT bridging.

Boba Network continues to grow its ecosystem. Well known projects such as LayerSwap, UMA, tofuNFT and Symbiosis integrated with Boba and NFT projects like Boba Apes, Boba Punks and Boba Doge sprang up too. Boba Network recently closed a $45 million Series A funding round from Infinite Capital, Hypersphere, 10X Capital Hack VC and more. This led the price of BOBA to spike by 30%. It has corrected since and BOBA is now trading at $1.42. This is 82% below its ATH hit soon after the BOBA token had launched. Boba Network’s native token BOBA was airdropped to OMG token holders last November, and there are currently around 159 million BOBA tokens circulating in the market. The total supply of BOBA is capped at 500 million. 42% of the supply is allocated to the treasury to support liquidity mining incentives and the growing BOBA ecosystem. Providing liquidity for BOBA-WETH on Uniswap V3 has been profitable in the past 5 days.

The average APY was over 100%. The APY each day is calculated as follows: 1 day return * 365. With our tool you will be able to customize the lookback period to calculate the average APYs. 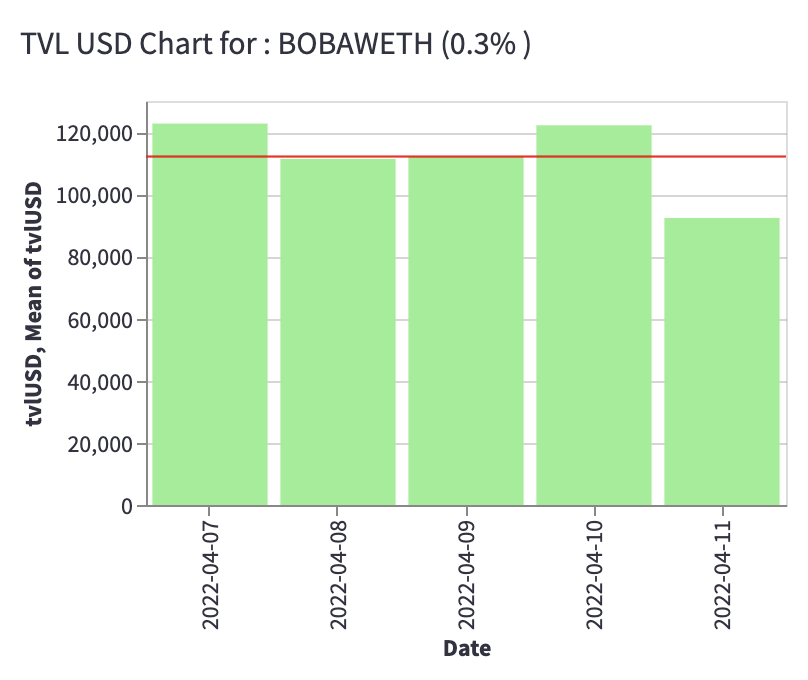 Another freshly funded blockchain project of the week is NEAR, a blockchain protocol with end-user usability at its core. NEAR Protocol is founded by Illia Polosoukhin, a former Google engineer and Alexander Skidanov, a former Microsoft software developer. Near raised $350 million from Tiger Global, Hashed, FTX Ventures, Dragonfly Capital among others. With NEAR, users can create human readable account names and use Single Sign On authentication which average users are more familiar with. To tackle the scalability issue, NEAR employs sharding, which is done by splitting the network into smaller pieces, like Ethereum does. The difference is that NEAR “dynamically” splits the network nodes depending on the usage. NEAR is working on interoperability with its EVM compatible network Aurora.

As a PoS (Proof-of-Stake) blockchain, the annual inflation rate is set at 5% to reward network validators with about 90% of the inflation going to the validators. To offset the inflation, the network usage fees paid in NEAR are burned. The total supply of NEAR is set at 1 billion and the circulating supply as of writing is 666.7 million. NEAR had a fantastic run in the past year having increased by more than 800%. The recent raise drove up the price of NEAR to $19.5, close to its January ATH of $20.42. It has corrected since but NEAR is still trading at $17. This pushed the RSI and RVI up to 62 and 69 respectively. NEAR reached a price range very close to its ATH recently so it might not be the optimal time to buy, however NEAR has a sound team who always has user’s accessibility in mind and definitely is one of the fastest growing blockchain ecosystems.

Animoca Brands is doubling down on racing games by acquiring Eden Games and Sony and Kirkbi (investment firm behind Lego) are investing $2 billion in Epic Games. As metaverse games continue to grow, metaverse guilds aimed at lowering the initial financial cost to play games and become metaverse citizens. Perion DAO is one of the newly born guilds serving the same goal of better established guilds such as Yield Guild Game, Unix and Merit Circle. Perion DAO was quick to recruit globally ranked gamers to maximize returns. One of the founders Amos Whitewof was ranked as the number 1 position on the global P2P leaderboard.

Perion DAO’s governance token PERC was made available to the public via IDO at the end of January. The IDO price was set at $1.2. 4 million tokens (4% of the total supply) were sold via IDO. Perion had also raised more than $10 million through private sales before the IDO. Investors include Animoca Brands, Framework Ventures, Alameda Research, Pantera Capital, Apollo Capital and more. The total supply of PERC is 100 million, private round investors are allocated 24.33%, founders 18%, community 39.17% and the treasury 15%. Scholars borrow game assets from the DAO treasury and the scholars keep 50% of the revenue they earn from gaming activities. Perion DAO Treasury is currently holding about $14 million worth of currencies, tokens and game assets. Perion DAO supports games such as Axie Infinity, Zed Run, Sidus Heroes, Star Atlas, Mavia Land and more.

Perion has a market capitalization of $2 million and PERC is currently trading at 0.55, less than half of the IDO price. Investors who want to gain exposure to diverse P2P games could consider investing in gaming guilds like Perion DAO.

Initiated by the founders of Telegram and now led by the TON open source community, TON(The Open Network) is a project that aims to connect decentralized networks and the internet. The headline-making news around the TON blockchain is that the TON Foundation is launching an ecosystem fund and has secured a $250 million initial commitment from notable institutions including Huobi Incubator, KuCoin Ventures, MEXC Pioneer Fund and more. The ecosystem fund announcement pushed the price of TON by 7% and the trading volume by 136% overnight. The programme will be doubling down on Web3, NFT and DeFi projects.

TON blockchain’s scalability is supported by its sharding mechanism that allows blockchains in the network to split and merge automatically based on the network load. TON blockchain’s architecture consists of a master chain and up to 292 accompanying blockchains. TON relies on the Proof-of-Stake consensus mechanism and the annual inflation is set at 0.6% to fund validator rewards. 5 billion TON tokens were minted at launch and currently 1.22 billion coins are circulating. TON is now trading at $2.01 and has a market cap of $2.45 billion.

Gala Games is a blockchain gaming platform that hosts games created by various gaming studios. Founded by Eric Schiermeyer, the co-founder of a  social gaming developer Zynga, Gala Games aims to redefine the world of gaming. A town development simulation game “Town Star”  is currently the only playable game in the Gala ecosystem. However, Gala Games has been releasing new NFT collections for its upcoming games including Mirandus and The Walking Dead on its VOX platform. VOX is Gala Game’s pixelated NFT avatar collectibles that earn rewards based on their rarity scores in Gala endorsed games and the VOXverse that is currently being developed by the Sims creator Will Wright. Mirandus’ in-game token MTRM was airdropped a month ago and its liquidity pool in Uniswap V3 is presenting juicy LP returns. According to our Uniswap V3 APY calculator (to be released soon) the 7day average of the MTRM-WETH pool APY is over 300%! 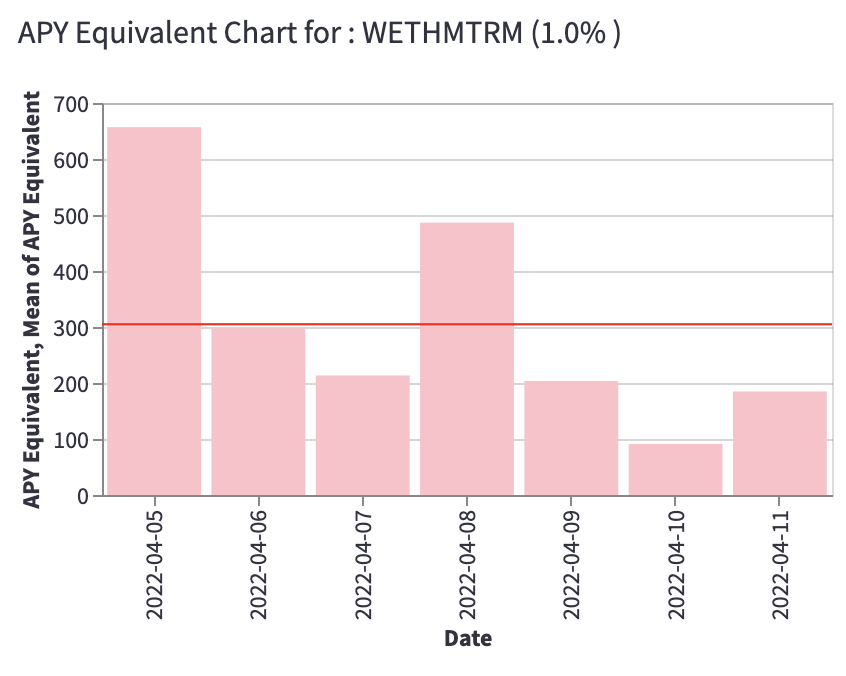 Gala also launched Gala Music to change how we consume music. Snoop Dogg launched his new album in partnership with Gala. Gala also announced that it would allocate $5 billion to expand its NFT ecosystem including gaming, music and movies.

Gala’s has a huge market capitalization of $1.4 billion in the play-to-earn market coming 4th following Decentraland, The Sandbox and Axie Infinity. The RSI is at 38 and the last time the RSI was sub 40 was in early February. The RVI is about to cross 50 to show a positive volatility for traders. The trading volume in the past 24 hours increased by 85%. Investors tracking the gaming and metaverse scenes should keep an eye on Gala’s to be released games and its foray into the music business.