BTC and ETH barely moved in price in the past 7 days. However, Tokens like GALA and SYN moved up in price faster than BTC and ETH today. 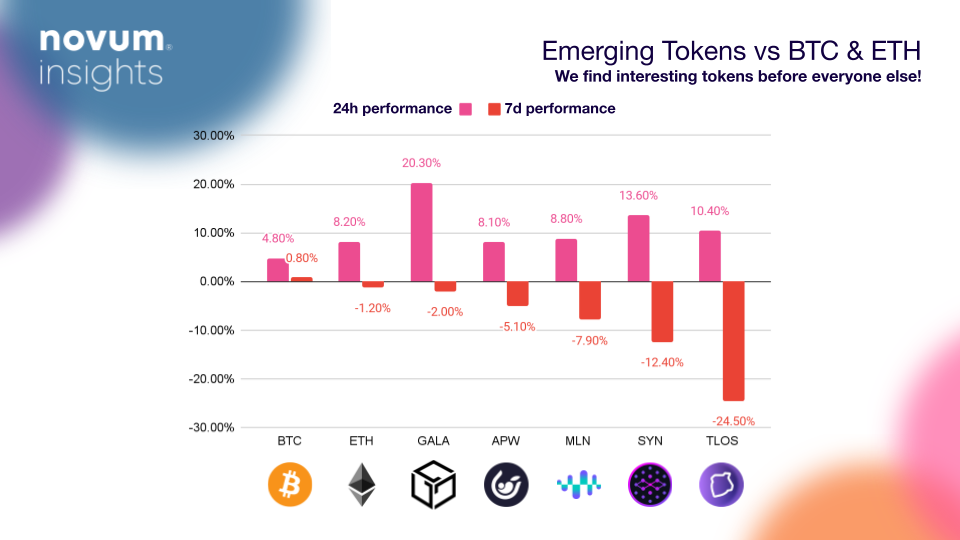 Telos is an EVM (Ethereum Virtual Machine) compatible blockchain running on EOS. Telos tackles the scalability issue with its high speed. Telos boasts 10,000 TPS (transactions per second) and a block time of 0.5 second. Ethereum can handle 15-45 TPS and has a block time of 13 seconds. Telos has a unique fee design. The network addresses the high gas fees using the fixed gas price. In Telos, no one can pay a higher gas price to have their transaction processed first. This eliminates the opportunity for frontrunning. Telos has two cost models for Telos dApp users and developers. The first offers users a free experience when interacting with an app, the app can stake the amount of TLOS that their users require. The app can not only purchase but also rent TLOS at the Telos Resource Exchange (REX). TLOS holders who lend out their resources receive an interest. If the application does not support this method, the second method allows users to stake TLOS themselves instead of paying a per-use gas price.

The market capitalization of TLOS stands at $272 million with circulating supply of 270 million. The total supply of TLOS is currently capped at 355 million. 4.1 million TLOS tokens are released to incentivize block producers, however, the inflation rate is 0% because the rewards are paid by the network’s reserve funds.

Telos’ native token TLOS has been featured as the emerging token of the week back in September 2021 by Novum Insights when the price was about $0.70. TLOS’ 2021 high touched $1.14 in late November. Since then it has decreased along the general market. However in the past 30 days, defying the bearish market sentiments, TLOS increased by 101.5%, while BTC increased by a mere 0.6% and ETH decreased by 9%. TLOS hit its all-time-high of $1.43 a week ago and has corrected since, and is now trading below 29% of its ATH. There are a few reasons behind this recent rally. Telos’ first DEX Omnidex went live in January. Omnidex currently has $7.6 million in liquidity. TelosPunks NFT project is set to launch soon on Telos EVM, TofuNFT was integrated with Telos, and popular Dapps like Sushiswap and Multichain added support to Telos. On AreaX NFT, Telos native NFT marketplace, users can also buy T-bonds which allows the purchase of TLOS at a discounted price in exchange for locking in BTC for a set period of time.

Synapse is a cross-chain liquidity protocol connecting over 10 blockchain networks focusing on stablecoins and ETH. Formerly known as Nerve, a stableswap protocol on BSC, the team rebranded the project to Synapse in August last year. Since the rebrand, it has bridged over $6.36 billion worth of assets and accumulated $1.1 billion in liquidity. The network is secured through cross-chain multi-party computation that when ⅔ of all validators sign the same transaction, the transaction proceeds to the destination chain. The validators are currently selected based on community governance, however, as the project matures, the network will be secured via DPoS (Delegated Proof of Stake), so validators will have to stake SYN.

When a stablecoin is bridged from one chain to another, the amount is converted to nUSD then bridged to the destination chain. The bridged nUSD is then swapped to the destination chain’s native stablecoins in the local pool. The fee is 0.05% per bridge transaction plus a minimum chain-specific fee. Users can also earn passive income ranging between 5-17% APY by providing liquidity to the Synapse pools.

There will be a total 250 million SYN tokens and currently 175 million are circulating. Currently 763,500 SYN tokens are released each week to incentivize liquidity providers and validators. The market cap of SYN stands at $465 million and is trading at $2.69, 46% below its October 2021 ATH. The trading volume however increased by more than 100% in the past 24h driving the price up 11%. The 7day RSI (relative strength index) is still low at 13.

Gala Games is a blockchain gaming platform that hosts games created by various gaming studios. The Gala team maintains the decentralized gaming network and provides the studios with their NFT libraries and wallets. Founded by Eric Schiermeyer, the co-founder of a  social gaming developer Zynga, Gala Games aims to redefine the world of gaming.

GALA has also been featured in Novum’s weekly emerging tokens back in October 2021. Since then, the price has almost quadrupled. GALA increased by 67% in February alone. This has been mostly fuelled by its recent aggressive march into the NFT space. Gala launched Gala Music to change how we consume music. Snoop Dogg has recently announced that he would launch his new album in partnership with Gala. Snoop’s new album Bacc On Death Row has 17 songs and Gala’s STASH BOX NFT contains one of those 17 songs. The sales end in 2 days and the price of the NFT is  15,460.501 GALA (around $5,000 approximately as of writing). Gala has also recently announced that it would allocate $5 billion to expand its NFT ecosystem including gaming, music and movies.

Gala’s has a huge market capitalization of $2.3 billion in the play-to-earn market coming 4th following Decentraland, The Sandbox and Axie Infinity. The RSI is at 58 and the RVI has just crossed 50, signaling a positive volatility for traders. Despite its recent stellar growth, among the 9 games included in the Gala Games ecosystem, Town Star is still the only playable game. Investors interested in Gala should monitor its venture into the music scene and whether the remaining 8 games will ever gain popularity.

APWine is a protocol that enables users to trade unrealized (future) yield. This is done by splitting the deposited interest bearing token(IBT) into principal token(PT) and future yield token(FYT). PTs represent the ownership of the deposited assets and FYTs represent the yield generated over a period of time. Splitting the interest bearing tokens into these parts enables users to 1) hedge against APY volatility by selling the FYT immediately on APWine AMM, 2) speculate on yield volatility by buying FYT on the AMM getting exposure to the yield market and 3) buy discounted assets by purchasing PTs waiting for the expiry to redeem the locked assets. To find out about detailed information on APWine’s AMM design, read this.

APWine went live on the Ethereum Mainnet and Polygon at the end of December 2021. Its native token APW has a maximum supply of 50 million and around 8 million tokens are currently circulating. APW has a voting escrow lock feature like Curve, meaning that locking APW will give users an increased voting weight and share of protocol fees.

APWine is currently trading at $1.15, 82% below its ATH hit back in November. Fixed interest rate protocol is a relatively new concept in DeFi and it has already been explored by a number of similar projects like Tempus, Pendle and 88mph. Among these protocols, 88mph has amassed the most TVL of $78 million. However, APWine offers the greatest diversities in tokens.

Enzyme is a DeFi asset management protocol that lets asset managers deploy their strategies and users subscribe to those strategies. Enzyme currently has $133 million in AUM and supports more than 200 assets. Founded by a former Goldman Sachs VP Mona El Isa and Forbes 30 under 30 Reto Trikler in 2016, after the delivery of V1, the control of Enzyme has been handed over to the Enzyme Council DAO.

Enzyme’s native token MLN has a circulating supply of 1.8 million and market cap of $105 million. With the recent update to v4, a flat 25bps fee charged on AUM accrues to MLN and users can have up to 50% of fee discounts if they pay in MLN. The RSI is at 44 and the RVI is headed to 50. Enzyme has a relatively long history of asset management in the crypto space along with TokenSets. Users who want to participate in DeFi but are afraid to actively manage themselves, protocols like Enzyme could be explored.