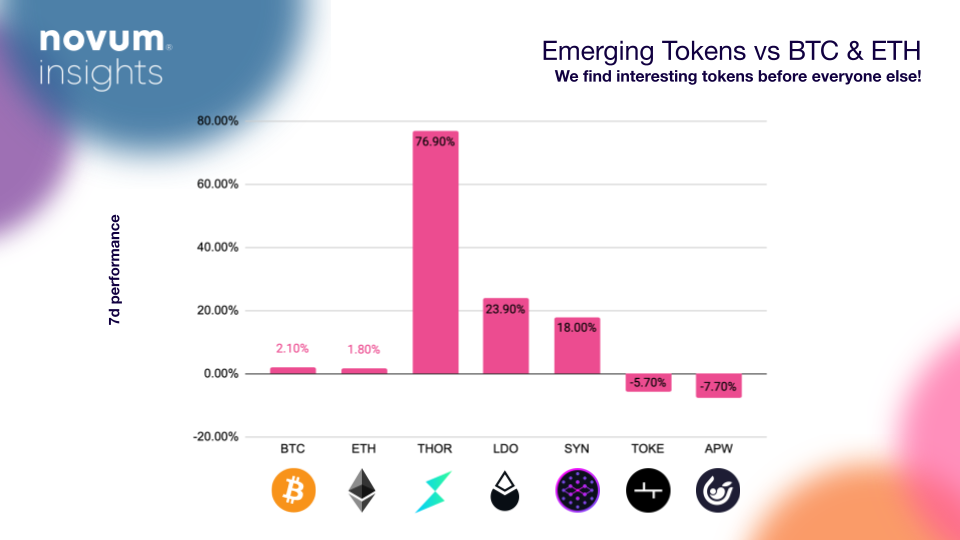 BTC and ETH both registered positive returns although minuscule. With the ethereum gas fees at an “affordable” level these days compared to six months ago. Maybe now is a good time to explore DeFi? This week, we look at DeFi protocols from staking, AMM, and liquidity routing to fixed interest.

Tokemak is a liquidity routing service. LPs of Tokemak provide liquidity via single asset staking, and Liquidity Directors (LDs) control where the liquidity flows. Tokemak’s Token Reactors are where project tokens such as OHM, TCR, VISR, APW, FOX and SNX are deposited, and Pair Reactors receive ETH or stablecoins. Deposited single assets are paired (Token Reactor / Pair Reactor) and deployed as liquidity across various DeFi venues - understood as Liquidity-as-a-Service. There is currently $1.1 billion locked in Tokemak.

LPs earn variable APR rewards in TOKE. LDs are the participants who stake TOKE and make votes to direct certain assets as liquidity to a preferred exchange / protocol. LDs also earn variable APR rewards in TOKE for directing liquidity. The APRs for liquidity directing range between 34% - 46% as of writing. To understand the reward logic better, read this. Tokemak’s impermanent loss mitigation strategies are also outlined here.

As Tokemak’s liquidity pairing approach gained traction, the Toke Wars similar to the Curve Wars ensued. Votemak, a protocol designed to bribe TOKE holders, has been acquired by Redacted Cartel.

TOKE has a total supply of 100 million. 30% of them is allocated as rewards and will be emitted over 2 years. TOKE is trading at $23 and has a market cap of $123 million. The RSI and RVI are low at 35 and 29 respectively. TOKE underperformed BTC and ETH in the past week. However, Tokemak designed an interesting liquidity solution and DeFi participants who want to control where to direct liquidity with Tokemak, this may not a bad moment to buy the dip.

Last week, we covered THORChain’s native token RUNE as one of our emerging tokens. Since then, RUNE increased by 80% and THORChain related projects like Thorswap (THOR), Thorstarter (XRUNE) and THORWallet DEX (TGT) all registered double, triple digit returns. This has been led by the launch of synthetic assets trading on THORChain. If you want to learn more about how synths work on THORChain, read our last week’s post here. THORChain is a cross-chain liquidity protocol that allows native swaps (not wrapped) across multiple blockchains and THORswap is a multi-chain DEX aggregator running on THORChain.

THORSwap’s native token THOR is used for governance, utility and proof of membership. THOR has a maximum supply of 500 million tokens and the majority of the total supply is allocated for community incentives. The pre-sale price of THOR was $0.075 and is now trading at $0.675 with a $16 million market capitalization. THORSwap has $254 million in liquidity and a $64 million 24h trading volume. Comparing these to those of market leader Uniswap’s ($4.4 billion in liquidity and $1 billion 24h volume), THORSwap is a lot smaller, however, it will be interesting to see how THOR synths get adopted by traders.

Synapse is a cross-chain liquidity protocol connecting over 10 blockchain networks focusing on stablecoins and ETH. Formerly known as Nerve, a stableswap protocol on BSC, the team rebranded the project to Synapse in August last year. Since the rebrand, it has bridged over $7.32 billion worth of assets and accumulated $724 million in liquidity. The network is secured through cross-chain multi-party computation that when ⅔ of all validators sign the same transaction, the transaction proceeds to the destination chain. The validators are currently selected based on community governance, however, as the project matures, the network will be secured via DPoS (Delegated Proof of Stake), so validators will have to stake SYN.

When a stablecoin is bridged from one chain to another, the amount is converted to nUSD then bridged to the destination chain. The bridged nUSD is then swapped to the destination chain’s native stablecoins in the local pool. The fee is 0.05% per bridge transaction plus a minimum chain-specific fee. Users can also earn passive income ranging between 3-14% APY by providing liquidity to the Synapse pools.

There will be a total 250 million SYN tokens and currently 180 million are circulating. Since our previous coverage of SYN, SYN got listed on 2 major exchanges Coinbase and Huobi. This led the price of SYN to surge by almost 30%. It has corrected since then and SYN is now trading at $2.38 with a market capitalization of $430 million. The trading volume however increased by 78% in the past 24h. The 7day RSI is at 45 and the RVI is at 40, yet to show a positive trading signal.

APWine is a protocol that enables users to trade unrealized (future) yield. This is done by splitting the deposited interest bearing token(IBT) into principal token(PT) and future yield token(FYT). PTs represent the ownership of the deposited assets and FYTs represent the yield generated over a period of time. Splitting the interest bearing tokens into these parts enables users to 1) hedge against APY volatility by selling the FYT immediately on APWine AMM, 2) speculate on yield volatility by buying FYT on the AMM getting exposure to the yield market and 3) buy discounted assets by purchasing PTs waiting for the expiry to redeem the locked assets. To find out about detailed information on APWine’s AMM design, read this.

APWine went live on the Ethereum Mainnet and Polygon at the end of December 2021. Its native token APW has a maximum supply of 50 million and around 8 million tokens are currently circulating. APW has a voting escrow lock feature like Curve, meaning that locking APW will give users an increased voting weight and share of protocol fees.

APWine is currently trading at $0.85, 87% below its ATH hit back in November. Fixed interest rate protocol is a relatively new concept in DeFi and it has already been explored by a number of similar projects like Tempus, Pendle and 88mph. Among these protocols, 88mph has amassed the most TVL of $43 million. However, APWine offers the greatest diversities in venues.

Lido is a leading liquid staking service provider. Staking with Lido allows users to use staked tokens to be deployed on various DeFi platforms to earn yields. Lido DAO started as the ETH 2.0 staking solution and now supports staking for Solana, Terra, Kusama and Polygon. The APRs vary from 4.3% to 22.8% and KSM (Kusama) currently has the highest APR. Integrated DeFi protocols where Lido’s staked assets can be used include Curve, Aave, Maker, Tempus Finance, Harvest, Sushiswap, Balancer and many more. Almost $14 billion is locked Lido and the protocol has paid out almost $300 million as rewards.

Lido’s governance token LDO has a total supply capped at 1 billion and currently 10% is circulating. However from a tokenomics perspective, LDO is not favorable to the community given that founding members hold 64% of the total supply.

Lido recently raised $70 million from a16z and Lido is continuing to grow DeFi venues to deploy its staked assets. LDO did well in the past week logging a 24% return. The RSI and RVI are pretty high at 61 and 60 respectively.