This week we see a wide range of projects making their way into the web3 economy. The chart below compares the price movement of BTC and ETH and Novum’s handpicked emerging tokens. Every token selected this week outperformed BTC and ETH. 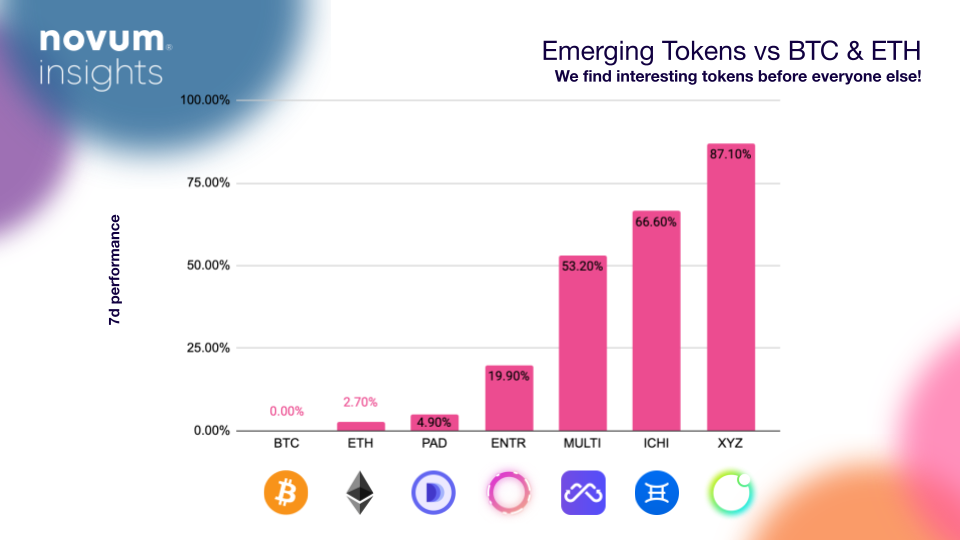 NearPad has a launchpad, DEX aggregator and yield aggregator. Projects launching on NearPad’s launchpad include MODA, a DAO for the music industry in the web3 economy, PULSE, a prediction market, ROSE, a stableswap that already has $13.8 million in liquidity.

PAD is NearPad’s governance token and has a total supply of 150 million. PAD currently has a market cap of $6 million and the trading volume in the past 24 hours increased by almost 100%. There are numerous benefits to PAD holders besides being able to participate in governance.  PAD holders who also stake can participate in the token distribution event for any projects launching on NearPad with a minimum of 1000 PADs staked. Stakers could also vote for projects they want to launch on NearPad. The protocol fee for NearPad will be used to buyback and bun PAD. Around 70% of the total supply of PAD will be held by the DAO Treasury and the DAO will decide how to distribute the amount. For a more detailed overview of PAD tokenomics, see here.

Formerly known as Anyswap, Multichain facilitates cross-chain interoperability. After a recent rebrand, Multichain raised a fresh $60 million funding from Binance Labs, Sequoia China, IDG Capital, Primitive Ventures and more. Multichain supports more than 1300 tokens to be transferred across 30 chains. Multichain sees a daily volume well above $300 million and 14k of daily users. A total supply of MULTI is set at 100 million. The current circulating supply of MULTI is 18 million and the uncirculated amount will be added to the Multi DAO smart contract. The use for the funds will be determined at a later date by governance votes.

Multichain has been featured in our Weekly Emerging Tokens three weeks ago and since then, MULTI had a great run logging in a 70% price increase until it hit its ATH. Its recent ATH hit 4 days ago pushed the RSI and RVI up to 73 and 81 respectively and they are now down at 55 and 42. The price of MULTI has been correcting, however, it is worth monitoring where the project can go given its recent $60 million funding, 300k+ user base and the fact that they are expanding their ecosystem at a rapid rate.

Ichi helps any crypto project or community to mint their branded dollars as USD pegged stablecoins (oneToken) that are redeemable 1 for 1 for USDC. With branded dollars, users no longer need to sit with project tokens that have limited usability in the DeFi space. Projects can also grow their protocol value by locking away the project tokens. More than $20 million worth of oneToken has been minted so far and the crypto projects that have deployed ICHI stablecoins (oneTokens) include Uniswap, 1Inch, Fuse, Dodo, Filecoin, Spaceshift FOX and more.

To mint ICHI stablecoins, users deposit both project tokens and USDC. The project tokens are locked in the Community Treasury and USDC is kept in the Collateral Reserve. How the treasury and reserve are maintained is decided by the oneToken community. They could be deployed in various DeFi strategies or the project tokens can be exchanged for USDC or vice versa. Check the current treasuries and collateral reserves for each project here. The minting ratio (project token : USDC) of any oneToken is set by oneToken votes. For example, the initial minting ratio for oneFUSE was set at 80% which means that users need to deposit $0.80 USDC and $0.2 FUSE to mint 1 oneFUSE.

ICHI is the governance token of the Ichi protocol. ICHI governance should not be confused with each oneToken treasury governance. ICHI is hard capped at 5 million and more than 4 million ICHI tokens are currently circulating. ICHI liquidity rewards program is active and you can see all pools here where you can earn ICHI. ICHI is currently trading at $9.43, 78% below its ATH back in November. ICHI increased by more than 60% in the past week and its market cap now stands at $39 million.

Universe.XYZ is a decentralized NFT marketplace founded by the founders of Barn Bridge, a tokenized risk protocol. To empower creators, Universe.XYZ does not charge creators any fees for the initial NFT launch, only resales will incur a 2% fee to fuel continued innovation of the platform. The team in Universe will work on custom ERC-721 tokens that can support a batch mint feature that allows up to 40 NFTs to be minted in one transaction and enable creators to collect resale royalties not only on Universe’s marketplace (not launched yet) but across diverse secondary markets such as Rarible. Universe.XYZ has dropped two core NFT collections so far - Polymorphs and Lobby Lobsters. They have floor prices of 0.179 ETH and 0.01 ETH respectively.

XYZ is Universe Protocol’s governance token that runs the xyzDAO which has a control especially over fees and future directions of the protocol. The xyzDAO is a direct fork of the BarnBridge DAO. XYZ has an initial total supply of 1 billion and an inflation of 69,777,777 XYZ tokens per year. 51% of the supply is allocated to team, advisory and contributors and the rest is allocated to the community. Launched in June last year, XYZ hit its ATH in August and since then, the price of XYZ had been decreasing until the beginning of this year when the price picked up and increased by more than 100% YTD.

EnterDAO is a decentralized autonomous organization on Ethereum working on opening new markets in the metaverse economy. EnterDAO’s core product is called LandWorks, a metaverse land marketplace. Metaverse landowners can rent out their properties to be used by metaverse projects looking to test the waters before committing to an idea or existing brands looking to establish metaverse presence. Landowners (tenants) will receive an NFT that represents the land they have lent out (rented). The NFT can then be staked to earn ENTR.

ENTR is the native token of EnterDAO whose current utility is governance only. EnterDAO’s protocol fees will be directed to the DAO Treasury and will be used to accelerate further growth of the EnterDAO ecosystem. The governance module of EnterDAO is the fork of BarnBridge DAO’s like in the case of Universe.XYZ’s. ENTR has a total supply of 100 million and a market capitalization of $9 million. The ENTR token launch took place in October last year. That was followed by the ATH, a correction and the metaverse boom of late October. Since then the price of ENTR had been continuously decreasing until early January 2022. ENTR increased by 20% in the past week and is now trading at $0.87 91% below its ATH and above 37% its ATL.

As a young project launched last fall, EnterDAO offers yield farming programs where users can stake popular metaverse tokens such as ILV, MANA, AXS, SAND and earn ENTR. Returns from yield farming might look fantastic, but investors should also keep in mind that EnterDAO does not have a working product available for users yet.