Yes, I am referring to the unglorious fall of the Terra blockchain that filled news headlines in the past week.

On May 9th, the price of UST started to depeg. By May 10, UST lost 30% its value, so naturally the Luna Foundation Guard (LFG) stepped in to defend the stability of UST. The LFG transferred 52,819 BTC (worth $1.65 billion) on May 9 to a counterparty to enable them to enter trades. The day after, the Foundation sold 33,206 BTC to buy back 1.16 billion UST. On May 11, a community proposal that would increase the minting capacity of LUNA by 4 times was submitted to absorb the UST more quickly.

Regardless of efforts, the price of UST fell as low as $0.30 within the first 48 hours since the beginning of the depeg. By this time, the market cap of UST was already 6.5x bigger than that of LUNA. At this point, nothing could be done to stop the death sprial and Terra’s $18 billion UST market cap and $25 billion LUNA market cap have been wiped out in a week.

Terra aggressively expanded its influence across multiple chains. Terra deployed UST liquidity on Curve and Rari Capital. Terra is one of the biggest DAO holders of Convex (CVX). Lido DAO enables liquid staking of LUNA and LUNA earned a spot to have its own Token Reactor in Tokemak, a liquidity-as-a-Service protocol.

This week, we look at DeFi protocols Curve and Lido DAO that facilitated Terra ecosystem expansion on Ethereum and how they reacted since the Terra crash. And we look at the winner of this debacle, Maker DAO.

There is always a winner in dark days, and this time the winner is Maker. Maker is a decentralized lending platform that is behind the household stablecoin DAI. Maker creates a collateralized debt position, whereby users can mint a USD pegged stablecoin DAI, upon deposit of collateral. Supported collateral types include ETH, WBTC, LINK, YFI, UNI, MANA, MATIC, GUSD and more. DAI is always overcollateralized, taking the volatile nature of cryptocurrencies into account. The minimum collateralization ratio for ETH as collateral is 150%, and the ratio differ by collateral type. If a user fails to maintain the collateralization ratio above the minimum requirement, the protocol will trigger liquidation which will carry a 13% liquidation penalty. The protocol also charges a stabliilty fee and this goes to the protocol to support operation. If the protocol accumulates more than the maximum level of surplus, the surplus in DAI is auctioned off in exchange for the protocol’s governance token MKR. The MKR paid in to the protocol gets burned. MKR launched with 1 million of total supply and now there are 977K MKR tokens circulating. MKR holders can vote on risk parameters, collateral types, fees etc.

The massive deviation of UST from its intended peg at $1 caused many stablecoin holders nervous. Tether’s USDT briefly fell as low as $0.95 and investors pulled out $7 billion. However, DAI has maintained its price peg in the past week. Every single DAI is fully collateralized and and the overall collaterlization ratio stands at 164%. 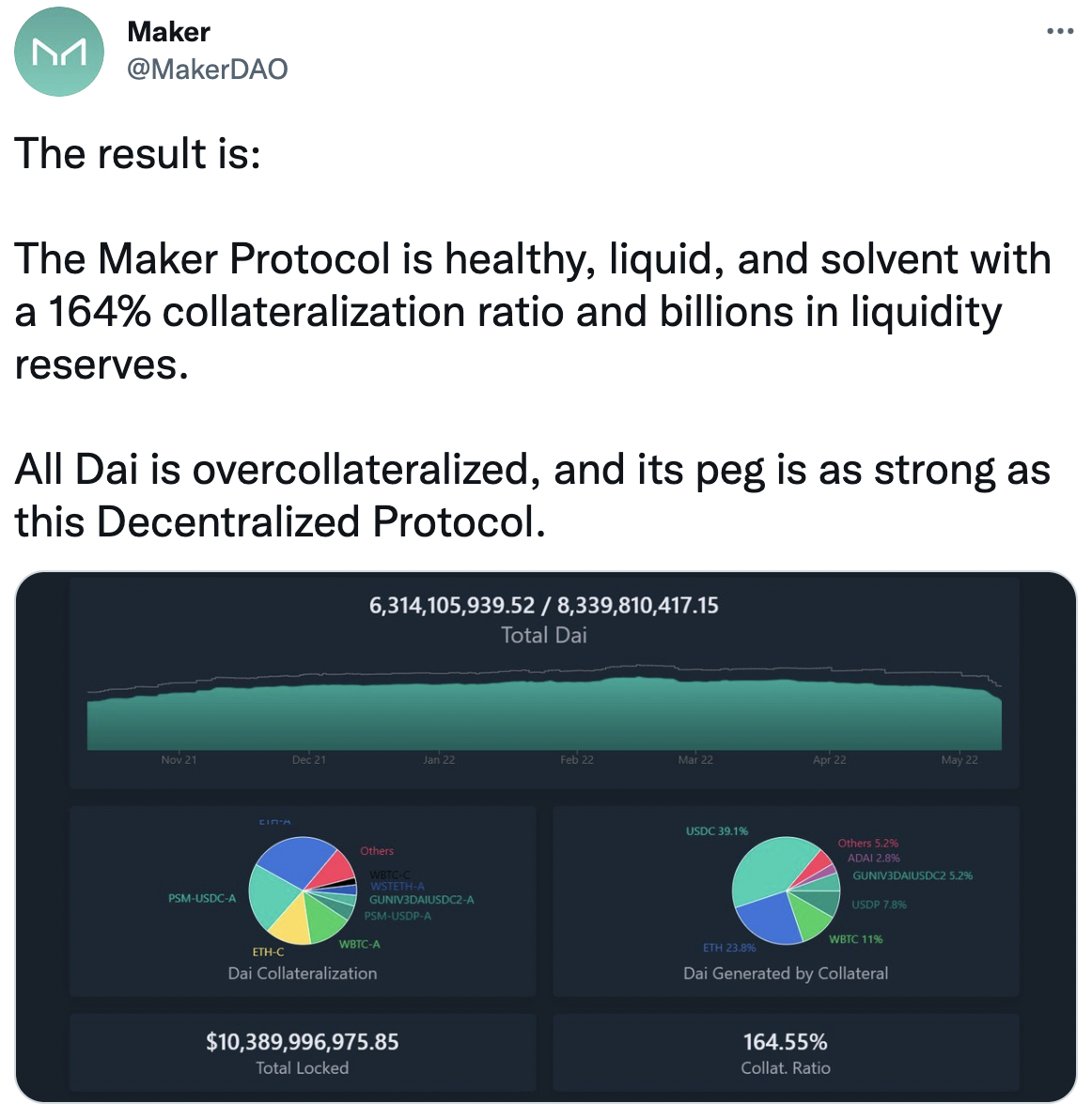 As the general crypto bear market continues and many asset prices fall, many positions had to be liquidated causing the burning of DAI supply. In the meantime, however, Maker made $1.5 million in DAI by charging liquidation penalties in between May 8th and 12th. Investors flocked to support DAI’s creator Maker and its governance token MKR which they consider ‘safe’. As a result, the price of MKR increased by 52% in the past week. Following the spike the RSI and RVI reading at 51 and 50 show a bullish sentiment for MKR. This tells us that in bear markets, keeping an eye out for what is considered ‘boring old’ protocols will definitely surprise you.

Curve is a decentralized stableswap protocol founded in 2020. Curve does one simple thing that is enabling users to trade between stablecoins with minimal slippage. With the launch of its governance token CRV later that year, Curve introduced vote lock tokenomics (veCRV) that allows users to reap more rewards. This means that users can redirect CRV emissions towards their desired pools and LPs in those pools can thus receive boosted rewards. A powerful protocol piggybaking on Curve’s boosted rewards came to life. Convex Finance lets users to pool CRV token to increase their influence on Curve gauge weights. Convex controls more than 46% of veCRV.

CRV that can be used for governance, staking and earning rewards has a total supply of 3.03 billion. 62% is allocated to reward liquidity providers. 50% of the trading fees go to veCRV holders. About a half of the total supply has been minted. Curve remains one of the top DeFi protocols on Ethereum, and there is currently $4.9 billion in TVL.

Now let’s look at what happened on Curve before and after Terra UST’s significant depegging. There has already been a lot of debates around stability of UST’s price peg mechanism and of the 20% APY offered by Anchor, savings protocol for UST where the majority of UST supply was locked up. Then finally on May 8th a whale dumped $85 million worth of UST to take out USDC from the UST + 3pool. 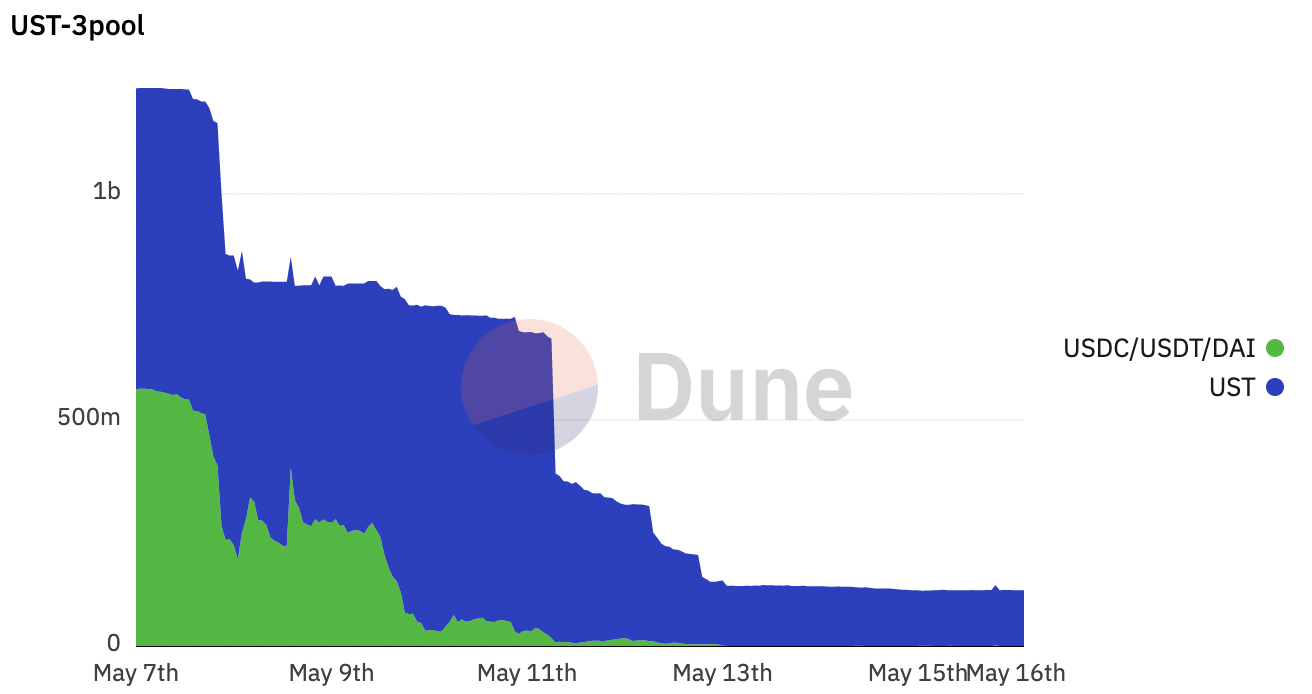 As shown above, the 3pool (made up of USDC/USDT/DAI) liquidity is depleted and now there is only UST in the pool. Prior to the UST depeg saga, there used to be around $9-10 billion locked in the protocol in March and April. Compared to equally influential protocols, TVL of Curve took a hard hit, having decreased by 43% in the past week while those of Aave, Uniswap and Compound decreased by 8%, 10%, and 17% respectively.

CRV had been hit hard by the UST debacle, however, it will be interesting to see how Curve can weather this by using its dominant position in stableswap AMM enabling various different stablecoins to be traded to hunt for fragmented DeFi yields.

Lido is a leading liquid staking service provider. Staking with Lido allows users to use staked tokens to be deployed on various DeFi platforms to earn yields. Lido DAO started as the ETH 2.0 staking solution and now supports staking for Solana, Terra, Kusama and Polygon. Integrated DeFi protocols where Lido’s staked assets can be used include Curve, Aave, Maker, Tempus Finance, Harvest, Sushiswap, Balancer and many more. Lido Also used Anchor to bring ETH and SOL to Terra. bETH and bSOL which represent staked ETH and staked SOL on Terra, could be used as collateral to borrow UST.

There is currently $8.7 billion in TVL in Lido. Now let’s look at stats before the Terra crisis. Lido had been steadily and rapidly sizing up in 2022 and the TVL in early May was $19.4 billion. However, due to the Terra crisis, the Lido’s LUNA TVL went from $6.4 billion to almost zero. 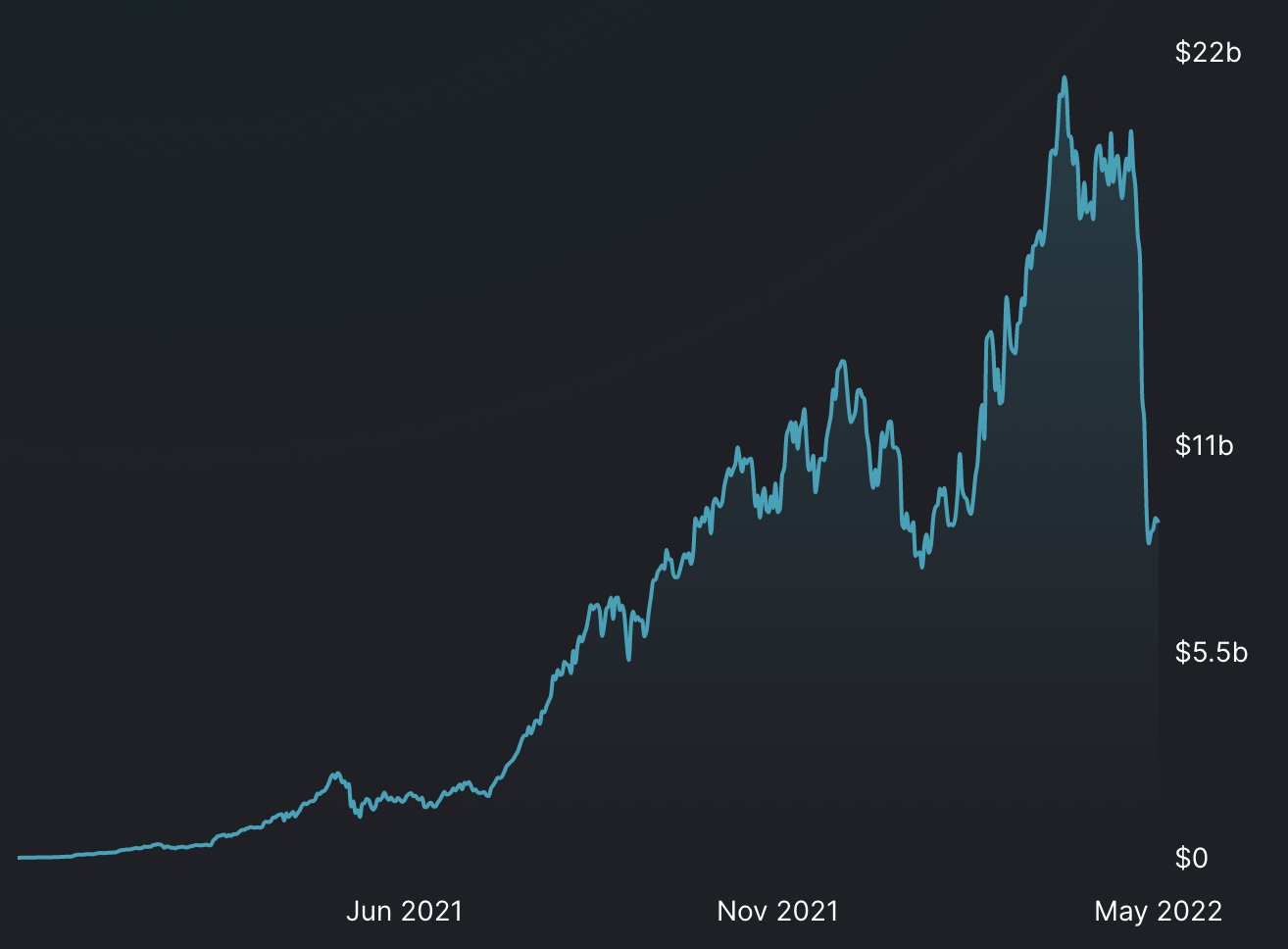 The price of Lido’s governance token LDO was also on a rollercoaster ride. LDO had been rallying just before the Terra collapsed as Binance announced that it would list LDO. The post cool off after the exchange listing had to be a specifically harsh one coincided with the collapse of Terra. Between the announcement and the UST depeg, LDO increased by 50%. However shortly after the crisis, LDO lost 57% of its value until now. Investors who used Lido to bring their ETH and SOL liquidity over Terra must have panicked when Terra blockchain halted.

LDO is now trading at $1.50, 92% below its ATH hit back in November, and has a market cap of $470 million. At dark times like this, investors turn towards save yields and liquid staking is one of them. Although LDO lost half of its TVL in the past week due to LUNA’s crash, Lido DAO still remains the most used liquid staking protocol for many other major assets like ETH and MATIC.