The world is wrapping its head around geopolitical consequences of Russia invading Ukraine. Uncertainly led traditional indices like S&P 500 and Nasdaq fell sharply in the third week of February and the crypto market followed. Then Russia started to get hit with sanctions and BTC and other coins started to recover. 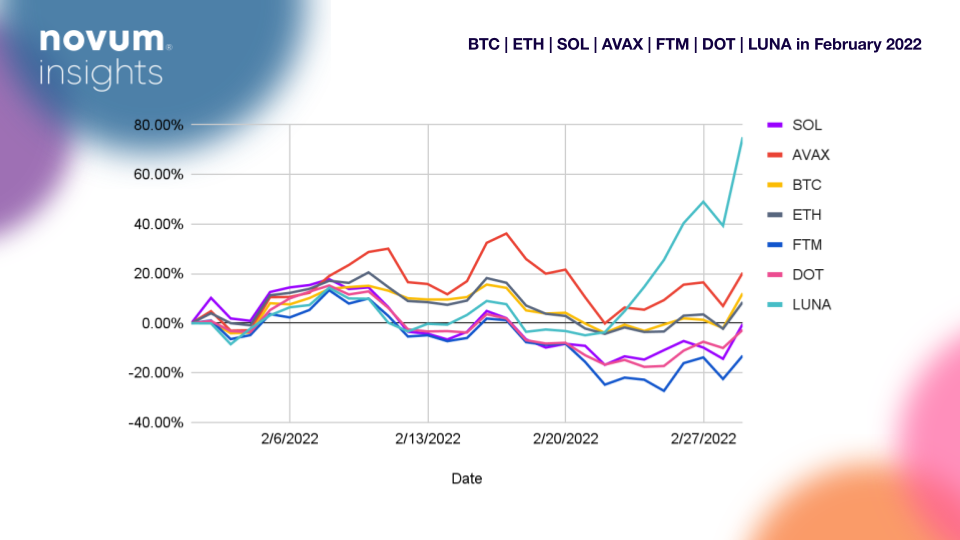 Solana debuted in April 2020 after an ICO (initial coin offering). Founded by ex-Qualcomm Anatoly Yakovenko and backed by numerous VCs including Almaeda Research, Adresseen Horowitz and others, Solana grew fast to become one of the Ethereum contenders. With the lightning fast transaction speed up to 65,000 TPS (transactions per second) and an average transaction fee of $0.00025 at its core, there was a time back in November Solana outpaced Cardano and Ripple in terms of market capitalization. During its November highs Solana had a market capitalization of over $70 billion. However, the cold crypto bear market, a recent $320 million wormhole attack and frequent network outages took a heavy toll on SOL’s token price. SOL went up as high as $260 and is now trading at $96.25, 60% below its ATH(all-time high).

Solana achieves scalability via the Proof-of-History(PoH) consensus which allows each validator node to create their own timestamps. There are concerns regarding whether Solana is decentralized because almost half of its initial token distribution is allocated to big investors and founding members.

Solana’s Serum DEX is the second most popular DEX in terms of 24h trading volume after Uniswap V3. And Star Atlas, the most awaited AAA Play-to-Earn game, is building on Solana.

Avalanche is a blockchain protocol that supports near-instant (sub second) transaction finality. Compared to bitcoin’s 60 min and Ethereum’s 6 min finality, this is wicked fast. Avalanche was started in Cornell University led by professor Emin Gün Sirer, and is now home to $11 billion dollar worth DeFi protocols including Trader Joe, Pangolin, Benqi and Wonderland.

Avalanche implements a unique blockchain design to tackle the scalability issue. Avalanche has three blockchains depending on its computing tasks: 1) X-chain (Exchange chain) is used to create and transfer funds such as AVAX and has a flat fee of 0.001 AVAX, 2) C-chain (Contract Chain) supports smart contracts and EVM compatible Dapps to run, and 3) P-Chain (Platform Chain) is used to manage staking and validating and create new subnets which run their own blockchains with their own customizable rules.

Until the tensions between Russia and Ukraine intensified and Russia finally invaded Ukraine, AVAX experienced the most interesting price ride in February. Then AVAX saw the steepest price drop of 37% in between 17th and 22nd of February among other selected tokens. This was followed by a 24% 7-day price increase. In February, AVAX outperformed ETH and BTC. AVAX is now trading at $86.58, 40% below its ATH reached back in November 2021. 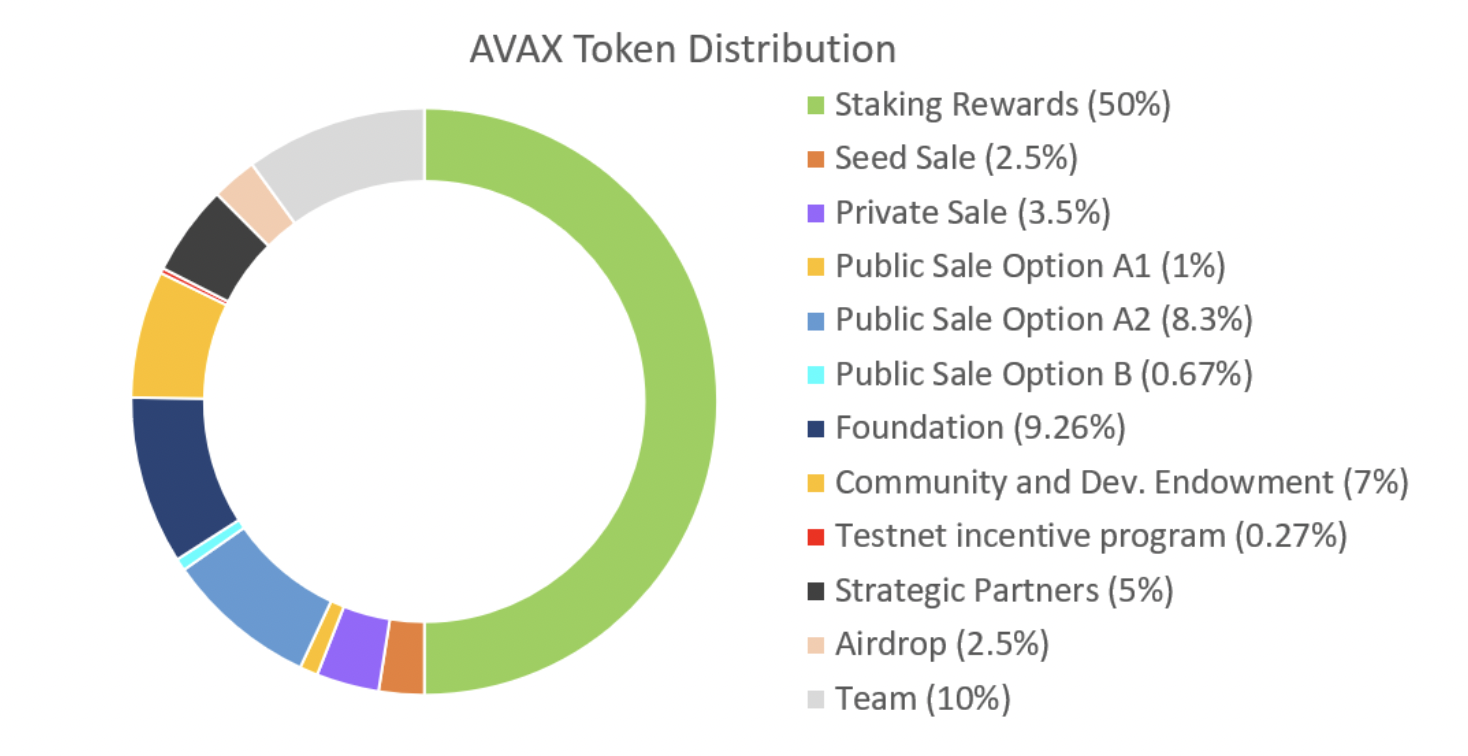 The total supply of AVAX is capped at 720 million, with 360 million released at launch back in September 2020. 50% is allocated to staking rewards and around 30% is allocated to team, investors and strategic partners. Of the total 720 million AVAX tokens, 246 million tokens are circulating. The current inflation rate is at 32% which is very high compared to Solana’s 9% and Fantom’s 13.62%. AVAX fees are burned to offset the high inflation. Avalanche’s market cap currently stands at $21 billion and ranked at the 10th biggest project in terms of market cap after Solana ($31 billion) and 5th biggest in terms of TVL.

Terra is a blockchain protocol specializing in global payments with the UST stablecoin serving the most important role within its ecosystem. Founded in 2018 by two South Koreans Do Kwon and Daniel Shin, Terra’s main product UST grew to become the 4th largest USD pegged stablecoin with a $580 million market capitalization. Terra grabbed 11% of the market share in terms of TVL. Ethereum still holds undefeatable dominance in the DeFi landscape, but Terra is the second biggest protocol after Ethereum and is followed by BSC, Fantom and Avalanche. The majority of Terra’s TVL comes from its savings protocol Anchor. However there had recently been a lot of concerns regarding Anchor as the yield reserves that pay out fixed 20% annual rate dwindled rapidly. The solution to this was Luna Foundation“topping up” $450 million. To Terra, Anchor Protocol was too big to fail. The graph below shows the depleting reserve and the $450 million injection by Luna Foundation.

Terra also faced ongoing investigations from the SEC concerning Mirror Finance, a protocol that enables the creation of synthetic assets. Despite several headline making turbulences, the price of Terra’s native token LUNA experienced price volatility the least among featured tokens in the first three weeks of February. The splendid price surge in the past seven days is caused by the announcement that UST would be backed by a $1 billion Bitcoin reserve. UST’s algorithmic pegging mechanism by burning and minting LUNA triggered controversies in stablecoin markets as much as Tether’s illiquid reserves did. By introducing a Bitcoin reserve, UST’s stability will be less correlated to the general health of the Terra ecosystem.

As much of Terra’s fate is dependent on the adoption of UST, it will be key to aggressively open up avenues for UST to be used as collateral, trading pair, yield farming across various DeFi protocols. LUNA has a market capitalization of $34 billion and is currently trading at $92.56, only 13% below its ATH.

Polkadot is a fully-sharded blockchain founded by Ethereum cop-founder Gavin Wood. Polkadot achieves scalability via parachains. Parachains are interconnected, customizable for various use cases and each parachin is attached to the Relay Chain. Parachains’ flexible and adaptive design makes bug fixes and upgrades easier and faster. The Relay Chain responsible for sharing the network’s security and consensus was rolled out in May 2020, and the parachains went live at the end of last year. There are a maximum 100 parachain slots available and these slots go to projects that outbid the others in DOT. After winning a slot, DOT tokens are bonded to pay for the slot lease. So far, Acala Network, Moonbeam Network, Astar Network, Parallel Finance, Clover Finance, Efinity, Composable Finance, Centrifuge and HydraDX won their slots.

Polkadot maintains consensus via Nominated Proof of Stake(NPoS) whereby nominators select the best validators based on past performance. Nominators receive a portion of validator rewards and in case of malicious acts of their chosen validators, nominators are also susceptible to slashing. 1 billion DOT tokens were created at launch and as Web3 Foundation’s flagship project, Polkadot allocated 30% of the supply to the foundation. The current token inflation rate is 9.99%.

Polkadot’s DeFi ecosystem has been largely led by Moonbeam, EVM-compatible smart contract paracahin. Famous DeFi protocols like Pickle Finance, Synapse, Beefy Finance and Celer cBridge integrated Moonbeam. Another parachain Astar Network announced a $100 million incentive program to boost its ecosystem. Polkadot is falling behind in terms of TVL compared to other featured chains in this post, however, with more parachain slots going live, there is a room for growth and anticipation.

Founded by the South Korean computer scientist Dr Ahn Byung Ik in 2018, the team behind Fantom has extensive experience in full-stack blockchain development. Michael Kong is the current CEO of the platform.

Fantom’s native token FTM has given investors a 100x return in 2021. Fantom is currently trading at $1.87. FTM reached its ATH in October 2021 and is currently below 46% of its ATH. In February, Fantom was the worst performer in terms of price changes. FTM is down 13% since 1st of February while LUNA, BTC, ETH and AVAX went up. However, what places Fantom far ahead of other protocols is its TVL to market cap ratio. Fantom’s TVL to market cap ratio is 2.46, while that of Avalanche and  Solana’s are 0.52 and 0.23 respectively.