BTC and ETH both logged little but positive price movements in the past week. This week we highlight projects that outperformed BTC and ETH, and emerging projects to watch. 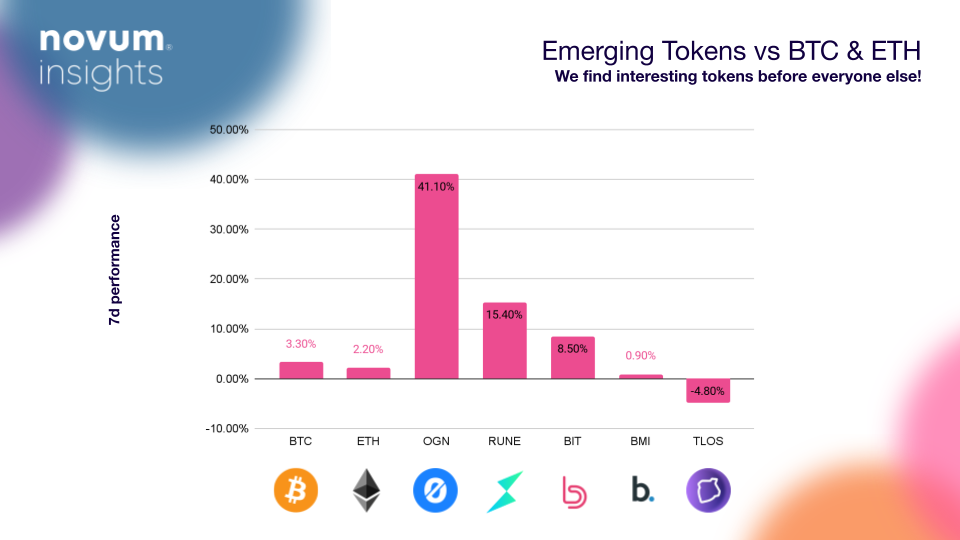 Origin Protocol is a platform aimed at accelerating the growth of NFTs and DeFi. Founded back in 2017 by tech entrepreneurs Josh Fraser and Matthew Lieu whose previous companies got acquired by Walmart and Yahoo, Origin Protocol’s initial founding mission was enabling p2p commerce. In recent years, Origin Protocol gained recognition by refocusing their platform around NFTs. Origin Protocol hosted numerous headline-making NFT drops including Paris Hilton’s “Past Lives, New Beginnings” NFT collection, world’s first tokenized album by 3LAU and an NFT charity to support Ukranians. Doubling down on the NFT space, Origin Protocol launched Origin Story, an NFT launchpad designed to enable creators to launch NFT collections on their own terms.

The other significant component of Origin Protocol is OUSD, a USD pegged stablecoin. OUSD is 100% backed by other stablecoins like USDT, USDC and DAI. While OUSD sits on in user’s wallet, it automatically earns yields. OUSD uses Aave, Compound, Curve and Convex to generate yield. The supply of OUSD rebases to reflect the yield generated by the protocol and the user’s balance of OUSD is updated automatically. The trailing 365 day APY of OUSD is 14.17%. The market cap of OUSD currently stands at $99 million. Origin Protocol looks to create OGV, a separate governance token for OUSD, to better reward OUSD holders separate to OGN holders.

Origin Protocol’s native token OGN’s market cap stands at $257 million and OGN is currently trading at $0.66, up 39.5% (7 days). Of 1 billion total supply of OGN, 39% are circulating. The increase in price can be explained by several factors. Origin Story will host Praise Pal’s NFT collection, OGN has recently been listed on Gate.io, a governance proposal to distribute Origin Story fees to OGN stakers passed. It will be interesting to see how the added rewards to OGN and the separation of OGN and OGV can work in every stakeholder’s favor.

THORChain is a cross-chain liquidity protocol that allows native swaps (not wrapped) across multiple blockchains. THORChain is also an independent blockchain based on Tendermint and Cosmos-SDK like Terra. THORChain launched a synthetic feature to improve trading experiences - users are be able to swap between synthetic assets and redeem to native assets within 5 seconds with a cost of 0.02 $RUNE only. THORChain synths are 100% collateralized by liquidity pool - 50% backed by RUNE, 50% backed by the underlying asset. Thorswap’s liquidity pools currently offer APYs of 14-23%. THORChain’s developer team has been actively improving the platform and rolled out Thorswap V2’s open beta last week.

THORChain supports blockchains such as Bitcoin, Ethereum and Luna. Since the launch of THORChain synths, the TVL in THORChain almost doubled. There is currently $465 million locked in THORChain. THORChain’s native token RUNE is used for governance,  incentives and liquidity thata supports the protocol. The total supply of RUNE is 500 million and 44% of the supply is allocated to the protocol reserve to pay out to nodes and liquidity providers. The market cap of RUNE stands at $2.8 million and RUNE is trading at $9.04. The launch of THOR synths led the price of RUNE to increase by almost 70% and the rally had continued for two good weeks. The cooldown ensued after the rally but compared to last time we covered RUNE in early March before the launch, RUNE  doubled in price. The RSI has been bouncing in between 40 and 52 in the past week. Investors looking to earn yields on native assets could consider participating in THORchain pools.

One of the recent proposals that entered the voting phase is using the DAO treasury to invest $6.5 million in PleasrDAO, a crypto collective DAO. PleasrDAO purchased cornerstone NFT pieces including Wu Tang Clan’s album, the original DOGE image, and Uniswap V3 ad NFT and has been funded by prominent VC firms like Adreessen Horowitz and Dragonfly Capital. BitDAO committed $200 million to zkSync ecosystem accelerator. Edu DAO - a multi-university DAO that will address blockchain research and education - has been formed funded by BitDAO’s treasury. Participating universities include world leading Harvard, MIT, Oxford, Tsinghua and more. BitDAO also formed a game DAO to accelerate the blockchain gaming space. BitDAO is supported by Peter Thiel, Pantera, Dragonfly, Bybit and more. Bybit has pledged to make recurring contributions of 2.5bps of futures trading volume to the BitDAO treasury.

BitDAO’s governance token BIT has a total supply of 10 billion and only 6% is currently circulating. Investors who wants to share BitDAO’s mission and fund new projects that will shape the future of web3, it would be interesting to participate in BitDAO’s governance votes.

Telos is an EVM (Ethereum Virtual Machine) compatible blockchain running on EOS. Launched in December 2018, Telos is one of the blockchain networks that is undergoing an exciting ecosystem expansion. Back in November 2021, Telos raised $8 million from prominent investors in the crypto space to fuel ecosystem growth. Then in February 2022, Telos launched its first hackathon to attract Solidity dev talents. A total of 52 projects submitted to build NFT platforms, AMMs, yield optimizers, DAO tools and more. The team is currently determining the 7 finalists.

Telos is home to Dapps such as Taikai, a hackathon management platform, APPICS, a web3 social media platform, Omnidex, TelosPunks and more. Telos is also integrated with established protocols such as SushiSwap, Multichain and TofuNFT. Telos’s first DEX Omnidex just rolled out a lending feature and a multichain swap platform Rubic is working to integrate Telos.

Telos tackles the scalability issue with its high speed. Telos boasts 10,000 TPS (transactions per second) and a block time of 0.5 second. Ethereum can handle 15-45 TPS and has a block time of 13 seconds. Telos has a unique fee design. The network addresses the high gas fees using the fixed gas price. In Telos, no one can pay a higher gas price to have their transaction processed first. This eliminates the opportunity for frontrunning. Telos has two cost models for Telos dApp users and developers. The first offers users a free experience when interacting with an app, the app can stake the amount of TLOS that their users require. The app can not only purchase but also rent TLOS at the Telos Resource Exchange (REX). TLOS holders who lend out their resources receive an interest. If the application does not support this method, the second method allows users to stake TLOS themselves instead of paying a per-use gas price.

The market capitalization of TLOS stands at $191 million with circulating supply of 270 million. The total supply of TLOS is currently capped at 355 million. 4.1 million TLOS tokens are released to incentivize block producers, however, the inflation rate is 0% because the rewards are paid by the network’s reserve funds.

TLOS reached the ATH of $1.43 in early February this year after Telos announced the hackathon. TLOS is now trading at $0.71, 50% below its ATH. The RSI and RVI are at 40 and 42 respectively. The token is not hyped at the moment and the RSI is yet to show a positive trading signal. However, it will be interesting to keep monitoring the rapidly expanding ecosystem.

Bridge Mutual is a decentralized insurance protocol that covers risks like smart contract hacks, stablecoin de-pegs and rugpulls. On Bridge Mutual, users can provide liquidity for coverage pools in USDT for diverse types of exploits in return for yields. The users can also purchase coverages for their desired protocols. Supported protocols by include handful of bluechip Dapps such as Aave, Uniswap, Sushiswap, Synthetix, SuperFarm, Perpetual, Maker, Compound, Anchor, Alchemix, 88mph, Ichi, Pendle, Popsicle Finance and many more. Bridge Mutual paid out an insurance claim made by an BMI insurance buyer who was affected by the Popsicle Finance hack back in August 2021. If you want to learn more about the detailed parameters of coverable events, read this.

Coverage providers earn 80% of the coverage premiums paid by coverage buyers (policy holders). The premiums are determined by the desired duration of the policy, the amount of cover and the utilization ratio (the ratio between cover bought and cover provided). If you want to learn how Bridge Mutual prices premiums, read the whitepaper here. Coverage provided in USDT is deployed to earn passive income for BMI stakers. 20% of the premiums paid by policy holders goes to Bridge Mutual’s reinsurance pool that acts as an internal coverage provider that can help regular coverage provider de-risk in case of insurance claims. Bridge Mutual also introduced a feature called “shield mining” that increases cover pools’ APYs to attract more coverage liquidity. Projects users can provide project tokens and get increased rewards in BMI, USDT and project tokens. Coverage pools that present highest APYs are Curve and Bancor. Both offer %40+ APYs to coverage providers. There most coverage pools offer around 3%.

Bridge Mutual conducted an IDO via Polkastarter in early 2021 and the IDO price of BMI was $0.125. It is now trading at half of the IDO price. The RSI and RVI are both low at 42 and 35 but they have been going up to show a positive trading signal since 3 days ago. Bridge Mutual has a long way to go to compete with sector leaders like Nexus Mutual, however, BMI has a low cap of $4.2 million and it will be interesting to see how its recently launched shield mining can boost APYs for other protocols and use its community-friendly BMI token distribution (over 55% to the community) to attract more users. Its expansion plan to Polygon and Binance Smart Chain should also be monitored.