BTC and ETH both logged little but negative price movements in the past week. This week we highlight projects that outperformed BTC and ETH, and emerging projects with high potentials. 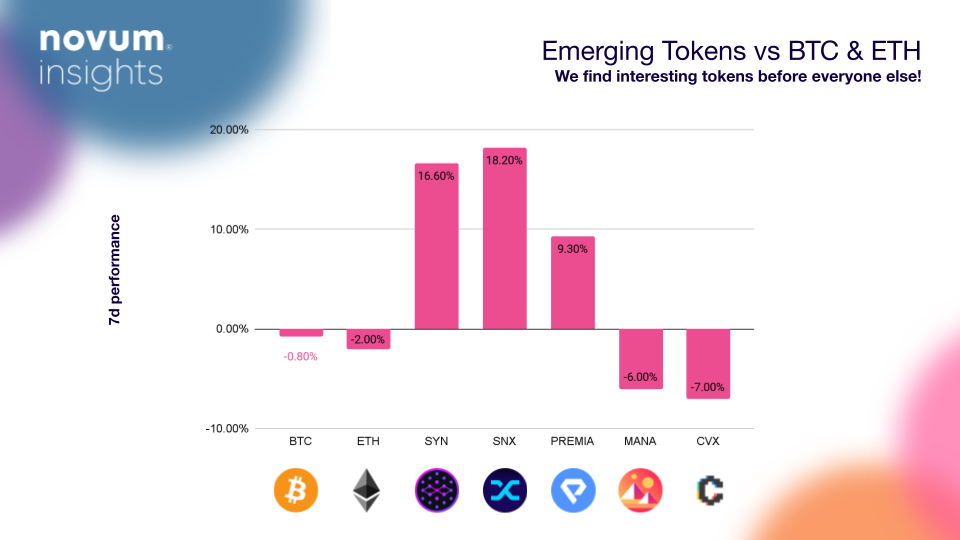 Convex Finance is a CRV rewards booster. Curve introduced the veCRV (vested CRV) and let the veCRV holders vote on Curve gauge weights. This means that they can redirect CRV emissions towards their desired pools and LPs in those pools can thus receive boosted rewards.

Convex Finance is the most influential platform that is built on top of this trend. More than 200 million CRV tokens are locked via Convex and Convex Finance distributed more than $535 million since launch in spring 2021. Via Convex, CRV holders can stake CRV. Pooled CRV is then converted to veCRV for boosted rewards. CRV stakers receive a share of boosted rewards, and CRV LP token stakers on Convex are eligible for trading fees and boosted rewards. This can be understood as “bribing” because Convex obtains influence over CRV emissions by helping users earn higher yields.

Convex Finance’s CVX token can also earn a share of boosted CRV rewards via staking. The total supply of CVX is capped at 100 million, and 50% is allocated to pay out CRV LP rewards and 25% is allocated to liquidity mining. 58.5% of the total supply is currently circulating. Convex charges a 16% performance fee on CRV revenues. CVX is available at major exchanges such as Binance, Gate.io, Sushiswap, Uniswap, Huobi, Kucoin among others. As the Curve Wars intensified, CVX price more than doubled in December 2021 and hit the ATH of $62.69 on the 1st of January 2021. The price of CVX increased during the recent ‘mini’ bullrun of mid March - early April. Since then CVX has been decreasing and the current RSI and RVI are at 43 and 35 respectively.

Convex contributed to the growing ecosystem of Curve, opening the next chapter in DeFi and popularized the “bribing” model. However, much concern is voiced about this trend because gaining monopoly over a project’s governance is the farthest thing from decentralization.

Synapse is a cross-chain liquidity protocol connecting over 10 blockchain networks focusing on stablecoins and ETH. Formerly known as Nerve, a stableswap protocol on BSC, the team rebranded the project to Synapse in August last year. Since the rebrand, it has bridged over $9.4 billion worth of assets and accumulated $878 million in liquidity. The network is secured through cross-chain multi-party computation that when ⅔ of all validators sign the same transaction, the transaction proceeds to the destination chain. The validators are currently selected based on community governance, however, as the project matures, the network will be secured via DPoS (Delegated Proof of Stake), so validators will have to stake SYN.

When a stablecoin is bridged from one chain to another, the amount is converted to nUSD then bridged to the destination chain. The bridged nUSD is then swapped to the destination chain’s native stablecoins in the local pool. The fee is 0.05% per bridge transaction plus a minimum chain-specific fee. Users can also earn passive income ranging between 3-16% APY by providing liquidity to the Synapse pools. The pool that has the highest APY is the Boba stableswap pool.

There will be a total 250 million SYN tokens and currently 180 million are circulating. The price of SYN increased by 16% in the past week, and SNX is currently trading at $3.08, 30% higher compared to last time we covered this token six weeks ago. Synapse also launched xAssets, that help tokens go multichain. To learn more about xAssets, read their Medium post here. It is now a must to have cross-chain support, and as one of the leading bridgers, Synapse look to solidify its position. It will be interesting to see Synapse’s ecosystem growth.

Decentraland is a blockchain-powered virtual-reality pioneer built on Ethereum. Decentraland has the biggest market cap in the metaverse space and as one of the first-movers, the company is well positioned to keep growing their dominance in this space. Decentraland is divided into parcels of LAND which are NFTs, and the ownership of LAND gives users full control of what they build. There are 90,601 land parcels in total and the LAND NFTs can be purchased with Decentraland’s native token MANA. The current floor price of those parcels is 2.35 ETH.

The price of MANA has been declining during the whole month of April and the current RSI and RVI stand at 38 and 35 respectively. Metaverse is indeed a highly volatile and new sector, however, Decentraland is definitely one of the leading platforms in the very sector with growing number of partnerships. And these partnerships prove that Decentraland and platforms alike can serve as a lucrative advertising venue. Investors betting on the metaverse should monitor MANA and what Decentraland is up to because Decentraland is one of the few places where it is developed enough to onboard brands and host events.

Synthetix is a decentralized derivatives liquidity protocol that enables the creation of synthetic assets. These assets allow users to gain price exposure to any asset. Users can mint and exchange a vast array of assets including fiat currencies, cryptocurrencies and indexes. Minting a synth starts with staking SNX, the network’s native token. Users lock in SNX as collateral with a collateral ratio of 400%, and mint sUSD. sUSD can leave the Synthetix protocol and be deployed on various DeFi platforms like Uniswap and Curve to yield income. sUSD can also be exchanged for other synths on Synthetix’s exchange platform Kwenta. The exchange fee ranges in between 0.1 - 0.6% the fees go to SNX stakers.

Originally built on Ethereum, Synthetic integrated with an L2 solution Optimism. Synthetix and Lyra recently launched an sUSD liquidity incentive program on Optimism. veCRV voters are incentivized to vote for the uSUD guage on Curve on Optimism. Weekly, 12,000 SNX and 50,000 LYRA tokens are allocated for this program. Lyra is an options trading platform leveraging Synthetix’s liquidity to manage collateral and hedge LPs.

SNX registered an 18% price increase over the past week. There have been a number of new features and improvements at Synthteix in recent months. Synthetic’s Kwenta v2 is released in beta with a perpetuals trading feature and SNX has been added to Grayscale’s DeFi fund. It will be interesting to see the growing use cases of Synthetix protocol.

Premia is a decentralized options AMM. Assets supported by Premia include - BTC, ETH, LUNA, LINK, YFI and ALCX. For each asset, there are 2 pools : a call pool and a put pool. Here, liquidity providers are the underwriters. Premia introduced a supply and demand factor, C-level, to the traditional Black-Scholes option pricing model. The C-level acts as a dynamic multiple to the Black-Scholes model and so high C-level is interpreted as expensive options price. LPs will also earn returns(option premium) sensitive to C-level where higher C-level will translate to bigger returns for LPs. The protocol fees for option purchase is 3% of the option’s base price. The exercise fee is set at 2.5% annual fee adjusted by the amount of capital and the length of time the capital was utilized. 80% of the protocol fee goes to users who stake PREMIA. And users can also have discounts in protocol fees if they lock staked PREMIA (xPREMIA) for some time. PREMIA has a total supply of 100 million and 30% is allocated to liquidity mining program. PREMIA has a market capitalization of $16.9 million and its winning attribute comes from the 80% protocol fee share for those who stake PREMIA.

Premia recently introduced a new feature that allows option holders to sell back their options to market-makers prior to expiration. The team at Premia is working to release v3 that allows more sophisticated trading. Premia looks to enable LPs to provide liquidity for buy-side, sell-side or both. To learn more about Premia’s v3, read their Medium article here.