This week we see a wide range of projects making their way into the web3 economy. Users started to seek fixed interest rates and cross-chain bridges are becoming a must-needed lego block in the future of multichain. We also see a growing interest in privacy and security in transaction ordering. Metaverse continues to be one of the most talked about topics. The chart below compares the price movement of BTC and ETH and Novum’s handpicked emerging tokens. Lending protocol Alchemix (ALCX) and Decentral Games ICE Poker (ICE) largely outperformed BTC and ETH. 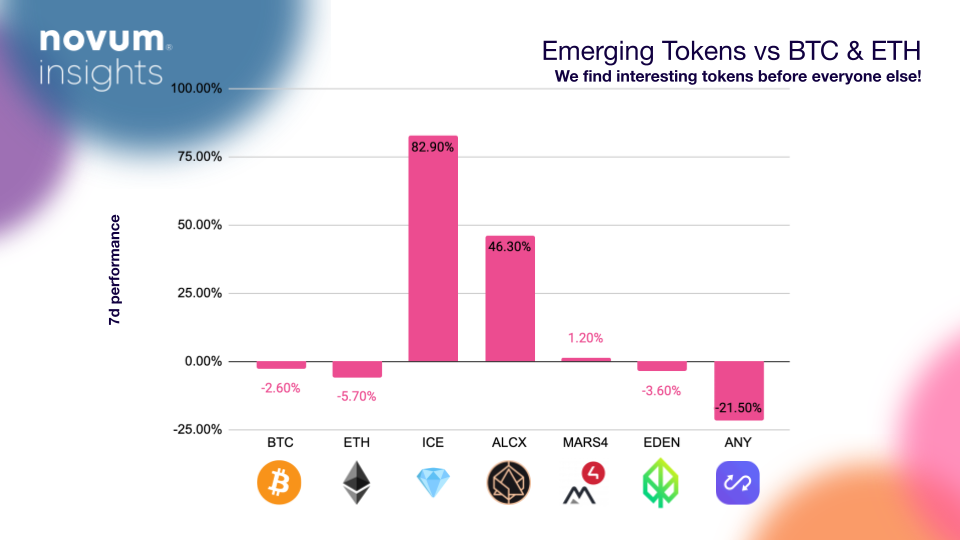 Alchemix is a DeFi protocol that lets users take out loans that repay themselves over time. This is made possible by leveraging synthetic assets that represent the future yield of a deposit. Alchemix currently supports alUSD and alETH. alUSD can be minted upon depositing DAI with a collateralization ratio of 200%, alETH can be minted upon depositing ETH with a collateralization ratio of 400%. Deposited DAI and ETH are deployed to the yearn.finance yDAI Vault and yvWETH vault respectively to earn yields that will automatically pay down the debt. As Alchemix relies on earning yields from colletarl, it does not force liquidations. There is more than $1.47 billion in total value locked in Alchemix, $245 million in market cap and 11.6 k unique addresses holding ALCX. ALCX had a great run in the past week scoring a 46% return. RSI jumped from 30 to 52 in the past 48 hours and RVI is signaling a healthy volatility for investors. The current circulating supply of the governance token ALCX is 900k. There is no hard cap of total supply and the estimated token supply in circulation after 3 years is 2,393,060 ALCX tokens. After that, there will be 4.5% annual inflation to gradually decrease over time. 80% of the supply in the first three years is allocated to staking and LP rewards! If you want to find more about ALCX staking pools, read this. The team at Alchemix is currently working on Alchemix v2, which will support integrations with EVM compatible chains like Solana, Fantom, Polygon and more and more collateral types such as BTC.

ICE is an in-game currency used in ICE Poker built by Decentral Games. Decentral Games is a metaverse casino DAO built on Polygon. Decentral Games raised funds from Binance Smart Chain, Polygon, Decentraland, Metaverse Ventures, AU21 Capital and more. Decentral Games rolled out several casino games including ICE Poker, blackjack, roulette and slots. These games can be played on the Decentraland metaverse. The total of 150 million ICE tokens will be minted and 100% of the supply will always be allocated for the community to fund game rewards, liquidity rewards and game liquidity. In order to participate in ICE Poker, users first need to buy an ICE NFT wearable for their metaverse avatar. Users compete to earn ICE by ‌completing daily challenges. All fees paid by Decentral Games players are collected in dgTreasury and the rewards for winners are also paid out from the treasury. The amount in the treasury has increased by more than $5 million this week. The treasury currently holds almost $60 million. The detailed breakdown of the treasury can be found here. 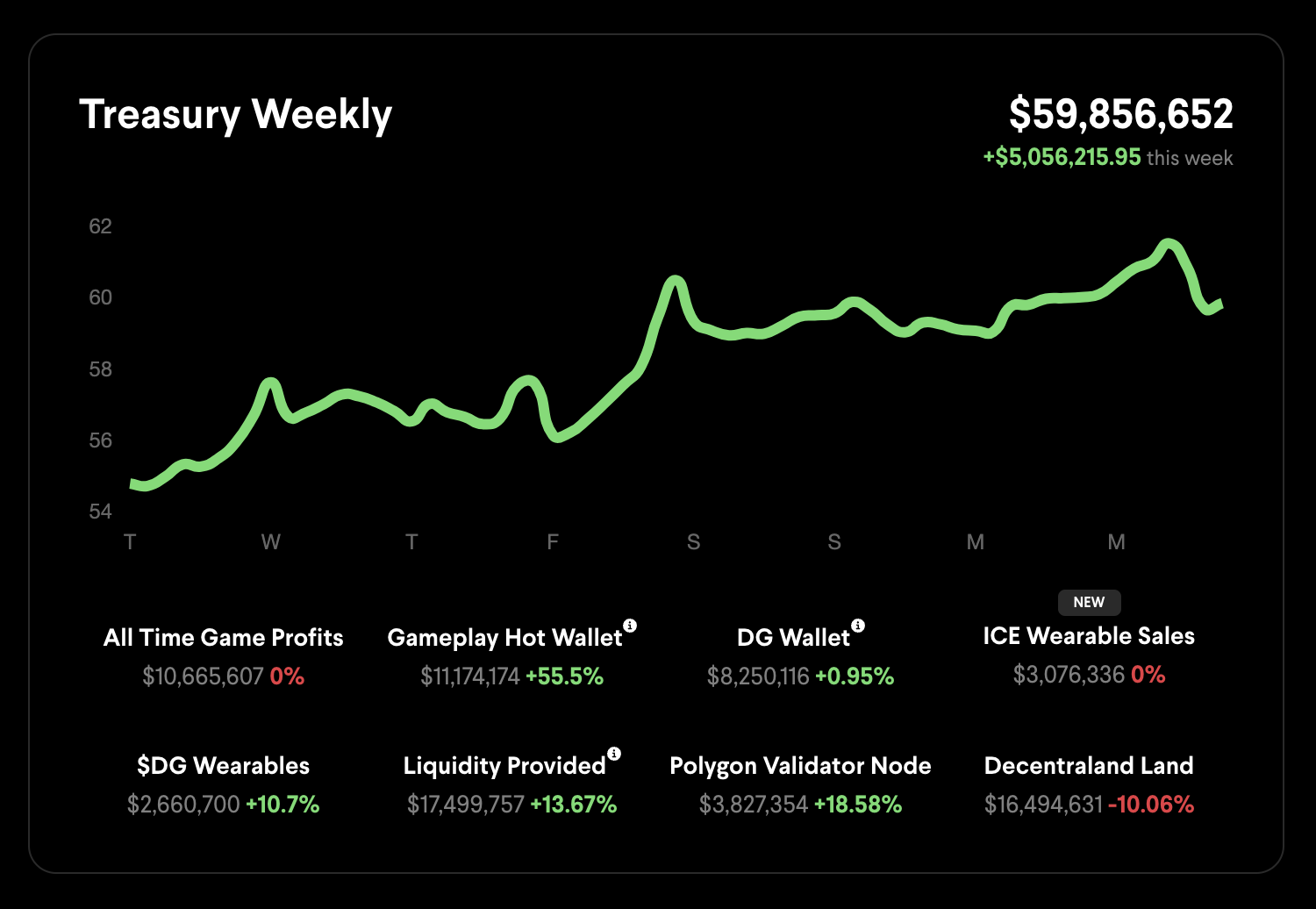 ICE saw a massive price jump of 140% in the past two weeks and RSI of 54 and and RVI of 60 do not signal an imminent correction. There has also been a 250% increase in daily trading volume in the past 24 hours. One other potential investment strategy with ICE is to provide liquidity on Polygon Quickswap. 50 million ICE tokens minted have been added to the dgTreasury for the liquidity provision in the ICE/USDC Quickswap pool, and NFT sales are converted to USDC and added to the pool. This pool has $8.6 million in liquidity and at current state, it offers 60% (variable) APR.

Eden Network is a transaction ordering protocol for Ethereum that protects users from frontrunning. Formerly known as Archer DAO, the rebrand took place in August 2021. Eden Network users can stake EDEN in order to submit private transactions and obtain guarantee placement within blocks. Eden Network introduces additional transaction ordering rules, and a new class of transaction created by Eden that gets priority above all other transactions in Eden is Slot Tenants. In order to become Slot Tenants, users must stake EDEN. Slots can be rented all the time via a continuous auction mechanism. The total supply of EDEN is set at 250 million EDEN, and monthly inflation is distributed to block producers (60%), liquidity providers (30%), and Eden treasury (10%). Eden Network looks to work with Manifold Finance that provides middleware solutions for DeFi applications, to have Eden included as one of the endpoints to send Manifold’s transactions. Manifold also offers trading and privacy protection for Sushiswap.

Launched in August 2021, EDEN hit its ATH in early September when they announced they had raised $17 million and since then the price of EDEN has been dipping. It is now trading 90% below its ATH. Alpha Finance and Band Protocol acquired a priority slot and Sushiswap also integrated Eden Network. Eden Network’s success will largely depend on onboarding DeFi platforms to use its MEV protection product.

Mars4 is a virtual Mars metaverse with the terrain 3D modeled after NASA’s data on Mars. Mars4 conducted its IDO on Sushiswap’s MISO launchpad in September. Mars4 divided Mars into 99,888 NFTs each representing unique geographical features and they can be acquired with MARS4 tokens. Terraforming will increase the value of Mars Land NFTs, and they also earn passive yield as 2% of the metaverse transactions goes to Mars NFT holders.

MARS4 token fuels the economy in Mars4 Metaverse. MARS4 has a total supply of 4 billion with 30% allocated for liquidity mining. MARS4 did not see a big price fluctuation in the past week - MARS4 has been trading in between the range of $0.0237 - $0.0242. MARS4 reached its ATH ($0.0895) two months ago, a month after its token generation event, and is now trading below 73.4%.

Mars4 is a very young project with no playable game released yet. The gaming concept has just been released and the metaverse will offer survival experience against harsh conditions on Mars. More information on the metaverse ecosystem will be needed to conduct a detailed review of this project. However, for Mars enthusiasts looking to explore the red planet and want to gain exposure to passive income from NFT holdings, this is not a bad time to buy MARS4 that is required to participate in the metaverse.

Formerly known as Anyswap, Multichain facilitates cross-chain interoperability. After a recent rebrand, Multichain raised a fresh $60 million funding from Binance Labs, Sequoia China, IDG Capital, Primitive Ventures and more. Multichain supports more than 1200 tokens to be transferred across 27 chains. Multichain sees a daily volume well above $100 million and 9k of daily users. Multichain users can now one-way swap ANY to MULTI 1:1 here. There will be a total 100 million MULTI tokens. The current circulating supply of ANY is 18.6 million(to be swapped to MULTI) and the uncirculated amount will be added to the Multi DAO smart contract. The use for the funds will be determined at a later date by governance votes.

ANY reached its ATH on the 20th of December shortly after its rebrand to MULTI. ANY is currently trading 35% below its ATH and its market cap now stands at $321 million. RSI is low at 36 and RVI of 33 is yet to point to a positive volatility for traders. However it is worth monitoring where the project can go given its recent $60 million funding, 300k+ user base and governance updates.