Both BTC and ETH are up by more than 15% and the optimistic view has been carried over to alts. We see big winners in various fields from DEXes, bridges, scaling solutions to NFTs. 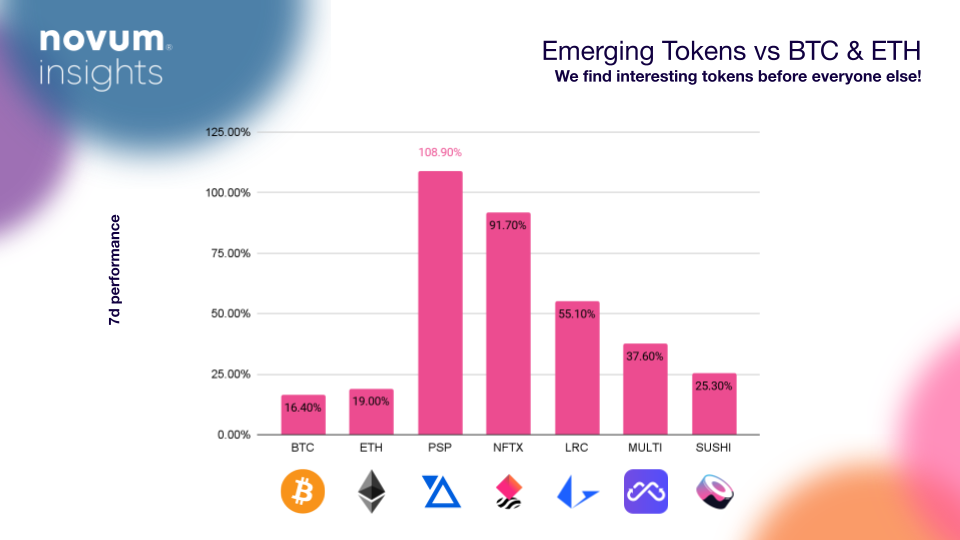 Loopring is a layer 2 scaling solution for Ethereum using zk rollup. Went live on the Ethereum mainnet in 2019, Loopring is made for faster and cheaper trading and payment and can process up to 2025 transactions per second. Loopring’s native token LRC is designed to incentivize user behavior that will benefit the Loopring ecosystem. 80% of the protocol fees will be paid to liquidity providers. See the detailed tokenomics here. There are currently more than 100k accounts holding LRC.

LRC saw a massive 10x spike in price in late October - early November after following a rumor that GameStop is potentially looking to use Loopring’s technology for its upcoming NFT marketplace. The price had been corrected since and then GameStop announced a new partner Immutable X which also led the IMX token to pump. However, last week Gamestop launched its beta version marketplace in partnership with Loopring. The price of LPC increased by 35% after the beta release announcement. This drove up the RSI and RVI of LRC to 72 and 71 respectively. The yield opportunities on LRC got more attractive. As the trading volume of LRC spiked on Uniswap v3, a go-to DeFi protocol for many traders and liquidity providers, the returns on trading fees earned by liquidity providers increased. 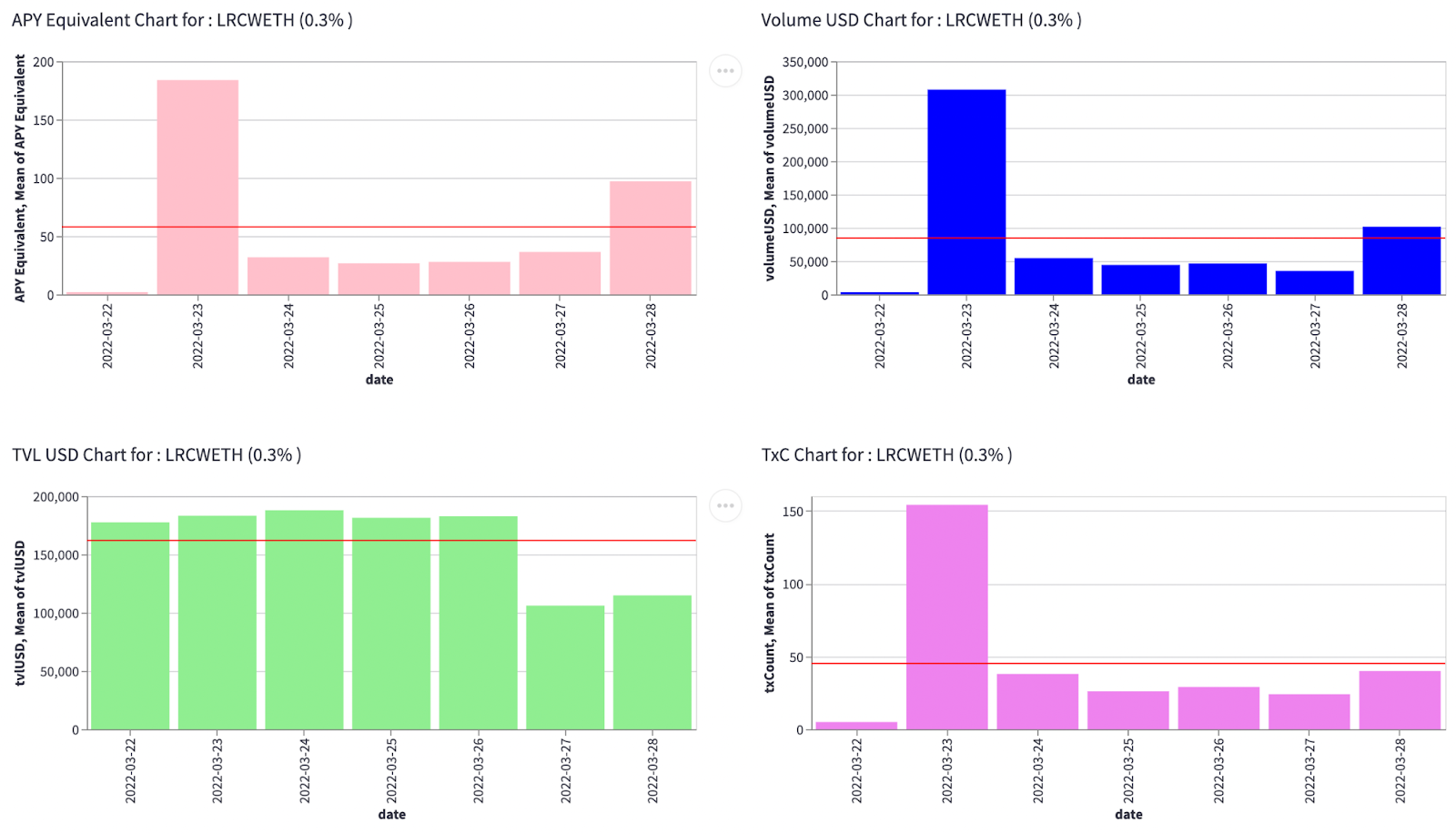 At Novum Insights, we are currently building a tool that fetches the most attractive LP returns on Uniswap V3. Take the above graph as a sneak peek. The 7day average of the LRC-WETH pool APY is around 55%. The APY each day is calculated as follows: 1 day return * 365. With our tool you will be able to customize the lookback period to calculate the average APYs.

Started out as a fork of Uniswap, Sushiswap became the second biggest DEX on Ethereum following Uniswap. Although Sushiswap had gone through a rugpull in the beginning of its journey by ‘Chef Nomi’ the anonymous founder, Sushiswap quickly rolled out features that could differentiate itself in the competitive DEX/AMM markets. While Uniswap focused on trading with the introduction of concentrated liquidity, Sushiswap onboarded yield farmers via Kashi (borrowing & lending), Onsen (liquidity mining) and Miso (launchpad). Many of the projects featured in Novum’s Emerging Tokens are listed on SushiSwap’s Onsen. Projects include Immutable X (IMX), Alchemix (ALCX), BitDAO (BIT), Lido DAO (LDO), Yield Guild Games (YGG), Illuvium (ILV), Multichain (MULTI) and many more.

Sushiswap’s native token SUSHI has its total supply capped at 250 million and 51% is currently circulating. The true value of SUSHI is unlocked when you stake. Users pay a 0.3% swap fee and 0.25% goes to liquidity providers and 0.05% goes to xSUSHI stakers. xSUSHI can also be deployed in additional yield farming, for example on Uniswap V3 to earn trading fees. The 7day average APY of the xSUSHI-WETH 1.0% pool is around 12%. 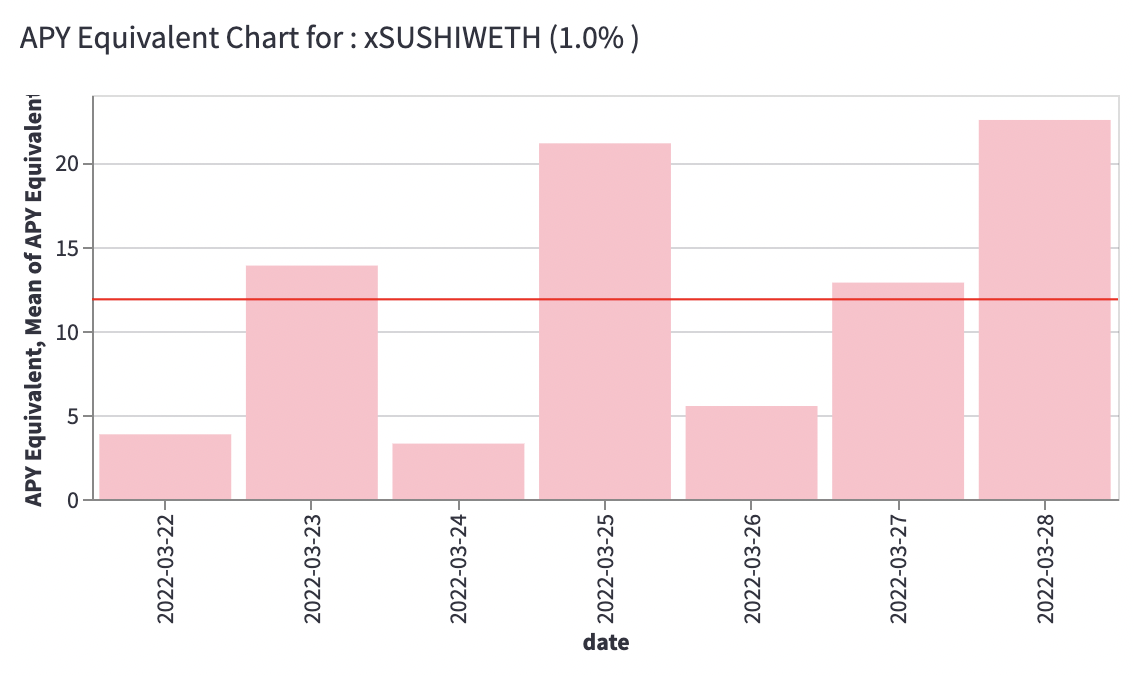 SUSHI increased by more than 40% in the past two weeks after the team launched a new feature ‘Trident’ on Polygon. Trident is an AMM production framework that allows a faster development of various pool designs. For more information check out their launch post or Github.

Sushiswap has also been one of the earliest projects that aggressively expanded supported networks. Sushiswap is now integrated with Polygon, Avalanche, Telos, Celo, Harmony, Moonbeam, Moonriver, Fantom, BSC and many others. There is $2.1 billion locked in Sushiswap. Most of the transactions still happen on the Ethereum chain followed by Arbitrum and Polygon.

Multichain is a cross-chain bridge. Multichain has briged over $70 billion worth of assets across 40 networks. The latest integration was with Milkomeda, a layer 2 rollup solution for Cardana, Solana and Algorand. A joint endeavor with Paraswap and Conflux, ‘Co-Mint’ was launched a week ago. Co-Mint allows multiple bridges to mint the same assets.

Multichain increased by 37% in the past 7 days. As one of Andre Cronje’s projects, Multichain started to fall when he announced that he was quitting DeFi in early March. Since then, the price of MULTI dropped by around 35% and bounced between $8.04 - $9.33 in the third week of March. MULTI is now trading at $13.19. It will be interesting to monitor Multichi that is expanding its ecosystem at a rapid rate.

Paraswap is a DEX aggregator that connects to major decentralized exchanges such as Uniswap, Kyber, Curve and 0x network to offer the best rates. On top of these DeFi protocols, Paraswap has its own market maker pool called ParaSwapPools whose liquidity is sourced by professional liquidity providers. ParaSwapPools provide MEV resistant trading and 0 slippage. Paraswap was built on Ethereum and now supports Polygon, Avalanche and BSC.

To ensure best rates, Paraswap can split orders across multiple platforms and if there isn’t a direct market for a desired pair, Paraswap will use its MultiPath feature to enable two or more hops. Paraswap does not charge any protocol fees but takes 15% of the fee generated by the services that are integrating with Paraswap. Apps integrated with Paraswap include crypto asset management protocols Stake DAO and Enzyme and more.

Paraswap’s governance token PSP was launched back in November. The total supply of PSP is 2 billion and 150 million tokens have been airdropped to early users. 51% of the total supply is allocated to the ecosystem which will be governed by the DAO. The governance proposal to support up to 100% gas refund for those who stake PSP has been passed and the gas refund feature went live last week. Also by staking on ParaSwapPools, the staker receives an auto compounding APY in PSP depending on the ParaSwapPool’s performance.

PSP had an epic run in the past 7 days having registered a return over 100%. Following the recent spike, the RSI went up as high as 68 on the 24th of March, and is now at 60. Even though now is not the best moment to buy PSP but it will be interesting to track the growing base of the Paraswap ecosystem and how Paraswap can help users and DeFi services tap into deep liquidity.

NFTX creates liquid markets for NFTs. NFTX pools NFT items in a vault and one vault exists per one NFT collection. When a user deposits an NFT into a vault, this mints a fungible ERC-20 token that can be traded on exchanges. For example, when a user supplies a cryptopunk NFT, the user gets back an ERC-20 vault token PUNK. PUNK can then be sold on Sushiswap. Or, if a user wants to buy a cryptopunk NFT, he/she can go on Sushiswap and buy PUNK and redeem a random NFT from the very collection for a fee. The user can select a specific NFT from the vault for an additional fee. Users can now swap an NFT for a different one in the same vault. The mint, redeem, swap fees range from 0% - 10% depending on the vault. There are more than 280 vaults (collections) available and there is more than $19.4 million in TVL. Vault fees are all paid to users who stake their SLP against the vault, in the vault tokens. NFTX also introduced inventory staking which allows users to deposit NFTs to NFTX vaults to earn vault yield without having to provide liquidity (vault token - ETH).

NFTX is a governance token of the NFTX platform and has a total supply of 650k. 60% of the total supply was distributed during the community raise. NFTX also had an epic run having logged a 90% return in the past 7 days. Following the spike, the RSI went up as high as 75 and is now at 67. Investors can definitely find a better moment to buy NFTX but if you are an NFT holder wanting to earn yield on them, NFTX could be one of the options available in the market.