BTC is trading over $30K while ETH is still below $2k. A new tokenomics update for Origin Protocol caused the price of OGN shoot up by more than 40%, Illuvium conducted a successful land sale on Immutable X. 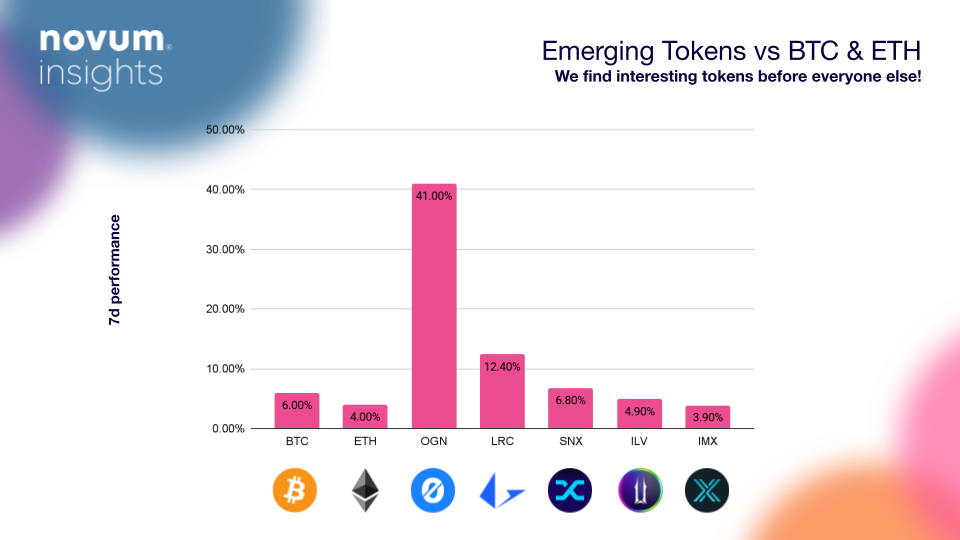 Immutable X is a layer 2 Ethereum solution for NFTs using Starkware’s ZK rollup. Starkware raised $100 million in Series D which valued the company at $8 billion few weeks ago. There have been a number of updates in the past week at Immutable X. Immutable X and Kongregate launched a $40 million developer fund to promote blockchain gaming. The company now supports MetaMask mobile apps. GameStop announced a few days ago that its NFT marketplace would host Immutalble’s gaming collections. The biggest recent update is that IMX will start enabling staking in June. Protocol fees - not gas fees but transaction fees - will be charged and 20% of the fees will flow to IMX stakers. The protocol fee will be set at a flat 1% for June, before returning to its regular 2%. Immutable X also supported Illuvium’s much anticipated land sale last Thursday.

Founded by James and Robbie Ferguson (both Forbes 30 under 30), Immutable X is powering leading blockchain gaming projects including Gods Unchained, RTFKT, Guild of Guardians and Illuvium. Immutable X supports up to 9000 transactions per second and users pay zero gas. This has been made possible by having Ethereum key sign transactions batched into a compressed validity proof. Immutable X also aims to be carbon neutral as the team claim they will buy carbon credits to offset the carbon footprint of each and every NFT minted or traded on Immutable X.

The market capitalization of IMX stands at $248 million with 12% of its total 2 million total supply currently circulating. The RSI of IMX reading at 50 shows a neutral signal, while RVI of 54 cues a positive trading signal. The trading volume and price of IMX rose by 70% and 10% respectively in the past 24 hours. It will be interesting to see whether IMX users find staking rewards profitable when the current NFT market is not lively and most collections’ floor prices are down a lot. Immutable X also raised $200 million at a $2.5 billion valuation this March.

Origin Protocol is a platform aimed at accelerating the growth of NFTs and DeFi. Founded back in 2017 by tech entrepreneurs Josh Fraser and Matthew Lieu whose previous companies got acquired by Walmart and Yahoo, Origin Protocol’s initial founding mission was enabling p2p commerce. In recent years, Origin Protocol gained recognition by refocusing their platform around NFTs. Origin Protocol hosted numerous headline-making NFT drops including Paris Hilton’s “Past Lives, New Beginnings” NFT collection, world’s first tokenized album by 3LAU and an NFT charity to support Ukranians. Doubling down on the NFT space, Origin Protocol launched Origin Story, an NFT launchpad designed to enable creators to launch NFT collections on their own terms.

The other significant component of Origin Protocol is OUSD, a USD pegged stablecoin. OUSD is 100% backed by other stablecoins like USDT, USDC and DAI. While OUSD sits on in user’s wallet, it automatically earns yields. OUSD uses Aave, Compound, Curve and Convex to generate yield. The supply of OUSD rebases to reflect the yield generated by the protocol and the user’s balance of OUSD is updated automatically. The trailing 365 day APY of OUSD is 12.65%. The market cap of OUSD currently stands at $68 million. Origin Protocol is creating OGV, a separate governance token for OUSD, to better reward OUSD holders separate to OGN holders. The total supply of OGV will be 4 billion, and 25% of them will be airdropped to OGN holders on July 12th.

Origin Protocol’s native token OGN’s market cap stands at $113 million and OGN is currently trading at $0.29, up 41% (7 days). Of 1 billion total supply of OGN, 39% are circulating. The increase in price can be explained by several factors. OGN has been recently lited on Kraken, and the community is expecting an airdrop of OGV tokens next month. It will be interesting to see how the added rewards to OGN and the separation of OGN and OGV can work in every stakeholder’s favor.

Loopring is a layer 2 scaling solution for Ethereum using zk rollup. Went live on the Ethereum mainnet in 2019, Loopring is made for faster and cheaper trading and payment and can process up to 2025 transactions per second. Loopring’s native token LRC is designed to incentivize user behavior that will benefit the Loopring ecosystem. 80% of the protocol fees will be paid to liquidity providers. See the detailed tokenomics here. There are currently more than 143k accounts holding LRC.

LRC saw a massive 10x spike in price in late October - early November after following a rumor that GameStop is potentially looking to use Loopring’s technology for its upcoming NFT marketplace. The price had been corrected since and then GameStop announced a new partner Immutable X which also led the IMX token to pump. The price of LRC saw a surge of 26% after Gamestop launched their wallet with Loopring integration. The current RSI and RVI are at 51 and 47 respectively showing neutral signal. Along with the general bearish market sentiment, the appetite for NFT trading is down a lot. Coinbase’s much awaited NFT marketplace logged poor performance and whether Loopring could continuously piggy back on the Gamestop NFT marketplace hype should be closely monitored.

Illuvium is a fantasy RPG game built on Ethereum. Gamers go on a journey to complete quests to hunt creatures called Illuvials. Founded by Kieran and Aaron Warwick, brothers of Synthetix co-founder Kain Warwick, Illuvium is the first AAA game built on Ethereum. Illuvium integrated Immutable X to offer users zero gas fees for P2P trading with instant transactions. Although the game is not live yet, Illuvium has been able to attract a lot of attention in the blockchain play to earn game space. Notable gaming guilds such as Yield Guild Games and Merit Circle added Illivium’s gaming NFTs to their inventories. The private beta was released in Q1 2022. Illuvium has sold out its first land sale and raised more than $72 million in sales. 20,000 land plots have been made available the NFTs were minted on Immutable X, an NFT scaling solution for Ethereum. The goal is to distribute 5% of the revenue generated from in-game purchases to the landowners.

ILV has a low token supply of 10 million. 30% of the total supply is allocated to yield farming and is scheduled over a 3 years period. 20% of the total supply is allocated to VC investors from whom Illuvium raised $5 million. Also10% of the supply was made available to public via Balancer Launchpad. The initial price for this was $50. ILV is currently trading at $289. While this price is way below its ATH of $1911 hit back in November 2021 following the metaverse boom across industries, it is still up 5-6x compared to its Balancer IDO price. We have seen a lot of NFT, metaverse projects that garnered tremendous attention but are now trading below their IDO price. The RSI and RVI are at 44 and 53 showing neutral sentiment, while ILV is trading below the 20, 50, 100, 200-day moving averages. The game is not live yet, ILV is considered a risky investment and users will need to monitor how many gamers the platform can attract for the project’s long term future.

Synthetix is a decentralized derivatives liquidity protocol that enables the creation of synthetic assets. These assets allow users to gain price exposure to any asset. Users can mint and exchange a vast array of assets including fiat currencies, cryptocurrencies and indexes. Minting a synth starts with staking SNX, the network’s native token. Users lock in SNX as collateral with a collateral ratio of 400%, and mint sUSD. sUSD can leave the Synthetix protocol and be deployed on various DeFi platforms like Uniswap and Curve to yield income. sUSD can also be exchanged for other synths on Synthetix’s exchange platform Kwenta. The exchange fee ranges in between 0.1 - 0.6% the fees go to SNX stakers. Originally built on Ethereum, Synthetic integrated with an L2 solution Optimism.