BTC is back over $40k and ETH over $3k. Most of the projects selected this week showed more or less a similar recovery path to BTC and ETH. The clear winner of the week is EnterDAO which has logged a return over 80% in the past week. 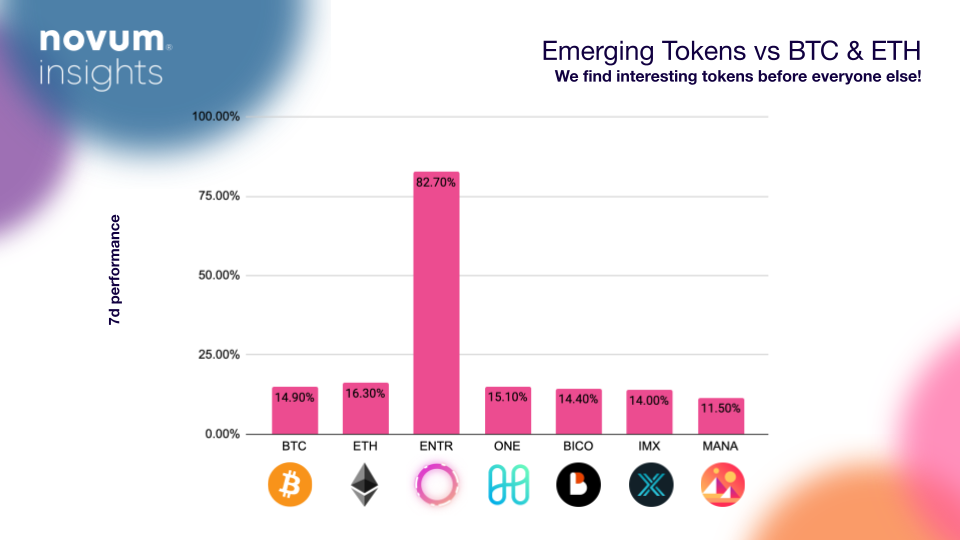 Immutable X is a layer 2 Ethereum solution for NFTs using Starkware’s ZK rollup. Founded by James and Robbie Ferguson (both Forbes 30 under 30), Immutable X is powering leading blockchain gaming projects including Gods Unchained, RTFKT, Guild of Guardians and Illuvium. Immutable X supports up to 9000 transactions per second and users pay zero gas. This has been made possible by having Ethereum key sign transactions batched into a compressed validity proof. Immutable X also aims to be carbon neutral as the team claim they will buy carbon credits to offset the carbon footprint of each and every NFT minted or traded on Immutable X.

Immutable X has recently grabbed the headlines as it has been revealed that the rumored partner for Gamestop’s new NFT marketplace was Immutable X. Soon after the partnership announcement, IMX rallied by over 50%. However, GameStop has also dumped $47 million worth of IMX tokens shortly after the price of IMX peaked. IMX is down 23% since the announcement, but in the past 24 hours, the price recovered by more than 10% and the trading volume is up 150%. Immutable X has also been criticized because the team released 40 million IMX tokens into circulation soon after the GameStop partnership announcement. IMX has a total supply of 2 billion tokens and currently 11% of them are circulating. The RSI has just crossed 50 and RVI is about to enter 60.

Decentraland is a blockchain-powered virtual-reality pioneer built on Ethereum. Metaverse is still one of the hottest topics in the crypto markets and Decentraland, as one of the first-movers is well positioned to keep growing their dominance in this space. Decentraland is divided into parcels of LAND which are NFTs, and the ownership of LAND gives users full control of what they build. The LAND NFTs can be purchased with Decentraland’s native token MANA. MANA has the biggest market capitalization ($ 6 billion) in the metaverse and Play-to-Earn markets, followed by The SandBox and Axie Infinity. MANA is also the 30th biggest project in crypto.

The concept of ‘metaverse’ continues to garner attention from everyday users. While its soon-to-be competitors are under development, Decentraland has onboarded many projects both traditional companies and crypto-native projects. Decentraland helped Samsung enter the metaverse with Samsung opening a virtual store in Decentraland a month ago. Miller Lite is also opening a virtual bar in Decentraland ahead of this year’s Super Bowl. Who is next Nike? McDonalds? Starbucks? Apart from these recent partnerships, Decentraland has gained significant user adoption in the Play-to-Earn space via strategic investment into a metaverse poker project Decentral Games.

MANA has been steadily recovering in the past two weeks from the wider crypto market downturn with the price of MANA increasing by 60%. The current RSI and RVI stand at 64 and 69 respectively. While this may not be the perfect time to invest, it is not too hyped either in terms of trading signals. Investors betting on the metaverse should monitor MANA and what Decentraland is up to because Decentraland is one of the few places where things are actually happening.

Harmony is a layer 1 blockchain protocol that has a high focus on cross-chain interoperability. Built by a strong team led by Dr. Stephen Tse, former employee of Google and Apple, Harmony has been steadily working on its fundamentals. Harmony can run Ethereum applications with 2 second transaction finality. Harmony achieves scalability by random state sharding. Harmony shards not only nodes but also the blockchain states. Harmony achieves network security via the Effective Proof of Stake (EPOS) mechanism. The EPOS mechanism avoids stake centralization as the design economically punishes higher ranked validators. The detailed formula that calculates the effective stake, on which block rewards are based, can be found here.

Harmony has launched several cross-chain bridges that support Ethereum and Binance Smart Chain. Harmony is also working on a Bitcoin bridge. Bluechip DeFi applications such as SushiSwap and Curve launched on Harmony. To develop its own DeFi ecosystem, Harmony has launched a $300 million grant programme in September. TVL in Harmony crossed $1 billion this January, which is up by more than 10x compared to six months earlier.

Harmony’s native token ONE has a circulating supply of 11.7 billion and a total supply of 13.3 billion. Harmony’s annual reward rate is set at 441 million ONE and the transaction fees paid in ONE are burnt. As Harmony achieves a wider adoption, the transaction fees burnt will offset the 441M annual reward. ONE has been steadily increasing in the past 5 days and is not trading at $0.227 and a market cap of $2.7 billion. The RSI just crossed 50 and RVI of 57 shows a positive trading signal.

EnterDAO is a decentralized autonomous organization on Ethereum working on opening new markets in the metaverse economy. EnterDAO has two core products: LandWorks and MetaPortal. LandWorks is a metaverse land marketplace. Metaverse landowners can rent out their properties to be used by metaverse projects looking to test the waters before committing to an idea or existing brands looking to establish metaverse presence. Landowners (tenants) will receive an NFT that represents the land they have lent out (rented). The NFT can then be staked to earn ENTR. MetaPortal aims to be a single point of access to blockchain based games, removing the need to navigate different gaming interfaces each time users play.

ENTR is the native token of EnterDAO whose current utility is governance only. EnterDAO’s protocol fees will be directed to the DAO Treasury and will be used to accelerate further growth of the EnterDAO ecosystem. The governance module of EnterDAO is the fork of BarnBridge DAO’s like in the case of Universe.XYZ’s. ENTR has a total supply of 100 million and a market capitalization of $22 million. We covered this project three weeks ago, and since then the price of ENTR has more than doubled. It is still trading 75% below its ATH which was soon after its launch back in October. Despite its recent spike in price, EnterDAO doesn’t have a product available to users yet. Risk-averse investors in the metaverse are advised to monitor the product launch and how much traction it garners as well as actual functionality.

Biconomy is a transaction relayer aimed at simplifying transactions on web3. Compared to web2, making transactions on web3 is not intuitive. There are gas fees involved and the fees are volatile. New user onboarding is complicated - from having to KYC, buy ETH on an exchange, download a wallet, to connect the wallet to DeFi applications. Biconomy helps developers create a more seamless user experience when interacting with web3. Biconomy’s infrastructure will take care of monitoring gas prices, transaction queues, and enable Dapps to pay gas fees for the users.

Biconomy’s infrastructure has been used by notable projects and developers including Aavegotchi, Perpetual Protocol, Idle Finance, Andre Cronje and many others. Biconomy has recently made it possible for Fantom dApps to integrate its infrastructure. A bluechip metaverse project The Sandbox also tapped into Biconomy’s gasless transactions to help its users migrate their LAND tokens without paying for gas. BICO has recently been listed on India’s biggest crypto exchange WazirX.

Biconomy’s native ERC-20 token BICO acts as network fees, governance token and stakeholder incentives. The total supply of BICO is 1 billion and 38.12% is allocated to the community as incentives. BICO has a market capitalization of $262 million. BICO’s RSI and RVI of 46 and 57 respectively, are both headed to show a positive trading signal. It could be a great moment for investors who want to invest in web3 infrastructure projects.