Everything you need to know about the Ethereum Merge

The crypto market is about to experience the most-anticipated development in crypto history, the Ethereum Merge. The Proof-of-Stake Beacon Chain consensus layer will finally be joined up with the current Mainnet, hence the “Merge”. This marks a complete move away from the Proof-of-Work (PoW) to Proof-of-Stake(PoS). The transition to PoS has long been in Ethereum’s agenda and it’s finally predicted to take place in between 10-20th September.

The upgrade will change how the network is secured, reduce the network’s energy consumption by 99% and lay the groundwork for future scalability capabilities. It will also change its tokenomics. Under PoW, miners were rewarded up to 13,000 freshly issued ETH per day. Under PoS, however, only 1,600 ETH needs to be issued daily to reward validators. Now that miner rewards will be taken out of the equation post-merge, the annual ETH issuance rate will come down by almost 90%. This new ETH issuance mixed with the fee burn mechanism, could make the token deflationary. The assumption is that since PoW mining is power and hence money-hungry activity most miners SELL a high percentage of their newly-mined rewards as soon as they are received leading to downward pressure every day. With the move to PoS this should stop.

With the upcoming merge as a catalyst, ETH saw a big uptick in its price in the past two months. From its sub $1k 2022 low in June, the price of ETH hit $2k by mid-August. Liquid staking protocol Lido’s stETH that used to suffer from a significant discount relative to the price of ETH after the Terra fiasco is also on track to recovery. stETH had been trading at a 7% discount back in June. In the past week, it has been trading at a 2.5-3% discount.

However, with increasing fear and uncertainty over whether the Merge would go smoothly or not, the ETH rally went into a retraction mode again having fallen 8.7% in the past week. A popular and easy-to-understand analogy regarding the merge is that it’s like switching to an electric engine from a gasoline one all while the car is in motion.

What potential risks and possible consequences of the Merge are out there? Let’s dive in.

The Merge is marketed as a seamless transition to everyday users. Ethereum.org states: 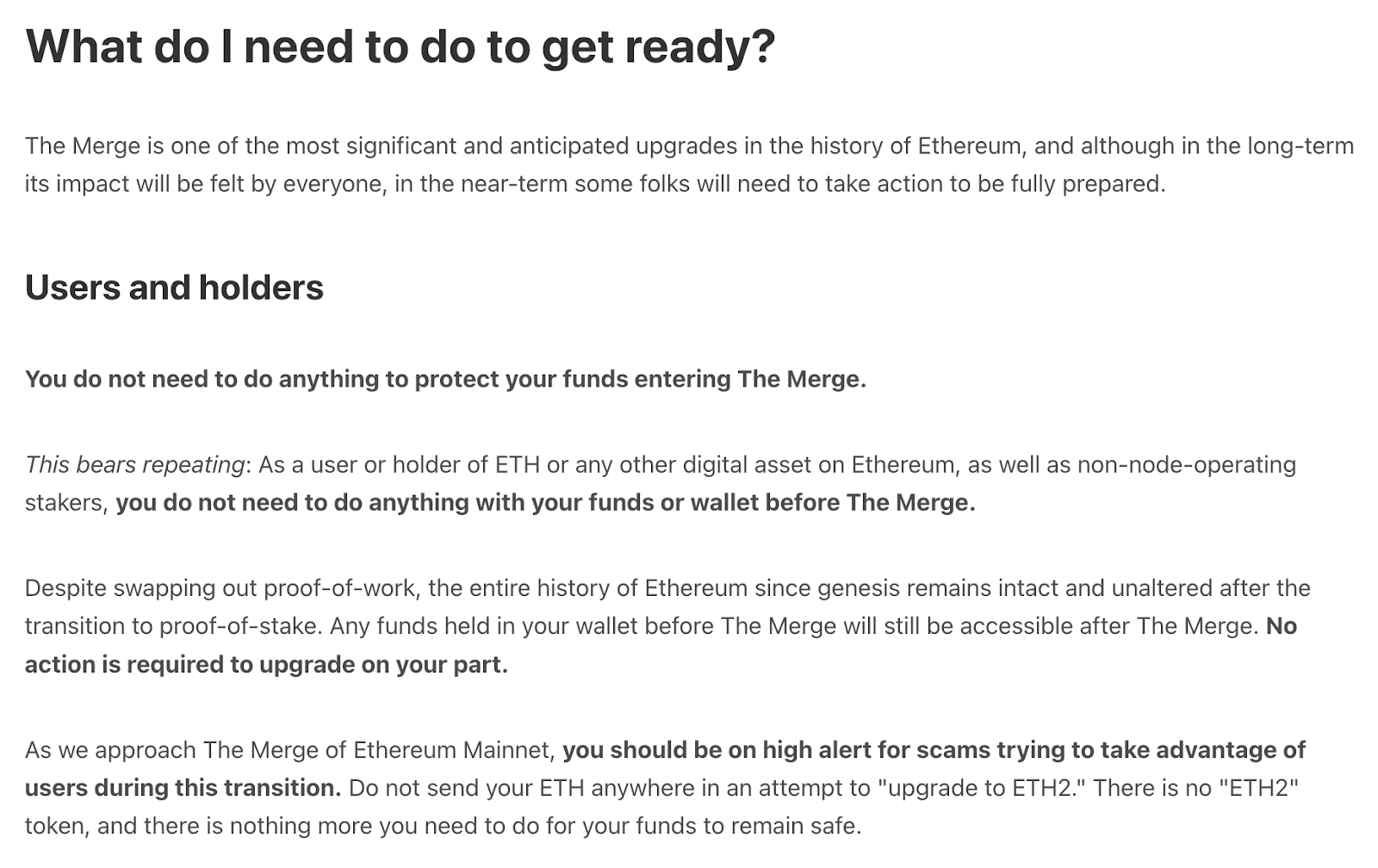 Okay, apparently we don’t have to do anything. Then will we be airdropped with the new ETH tokens automatically? No. All your ETH, ERC-20 and NFT assets will appear as usual and they do not need to be updated/migrated/transferred. However, there will always be a party that will take advantage of the confusion and scam users with “ETH2” tokens. Popular exchanges like Coinbase and Binance said that they would temporarily halt Ethereum deposits and withdrawals during the Merge. It is highly recommended that users carefully research Ethereum Dapps and wallets they are using and take cautious steps required to use the new Ethereum.

So then we’re good to go as long as we don’t get phished? No, we haven’t asked the billion dollar question yet. Where do all miners go? Miners played a key role securing the network in the PoW and as DeFi and NFTs flourished, Ethereum mining revenue beat Bitcoin mining revenue last year. As mentioned earlier, transition to PoS has long been in the agenda but after many years of delay, miners looking to take quick gains set up ginormous mining rigs anyways. Many of them haven’t been able to be profitable yet, so what do they do when they’re on the verge of being completely left out, swallow it and move on? Why do this  when they can hard fork?

With the pivotal change to the network expected to happen soon, some miners have been gearing up to conduct a hard fork. A key figure of the hard fork is Chandler Guo, who supported the fork of Ethereum Classic in 2016.

There is now a Twitter account and a Github page dedicated to Ethereum PoW. Another prominent proponent to this is Justin Sun, founder of Tron. Poloniex (owned by Justin Sun) listed an IOU token of ETHPoW(ETHW) and other exchanges like MEXC and Gate.io followed suit.

A fork in the chain would make an exact copy of the entire Ethereum ecosystem. When Ethereum split into ETH and ETC (Ethereum Classic), it was a different story. A flourishing DeFi environment did not exist and the market cap was only $1 billion. The Ethereum network is now worth over $200 billion, home to thousands of Dapps and tens of thousands of NFTs. DApps=Code=potential for things to ‘change’. The reality this time in 2022 is that this is a fork in the chain which is now preprogrammed and set to happen, leaving behind a full replica of everything which has happened to date including ERC20 tokens, NFTs, loans, liquidity pools and everything else. All that needs to happen is someone or someones to keep mining the original chain which of course becomes more rewarding as the number of miners drops along with the difficulty.

In theory, protocols like Compound and its native token COMP can exist in both chains, though we see no clear incentive to do so in long term. However, there are non-replicable assets like fiat backed stablecoins like USDC and USDT as they are backed by real world asset that is USD. They can only exist on a single chain at a time so the users can redeem them on a 1:1 basis. Fortunately, Tether and Circle both said they would recognize the PoS chain only. Most flagship projects like LINK, AAVE, Yuga Labs among many others showed its intention to support only PoS Ethereum.

Although the crypto community is busy navigating the outcome of the potential fork, still the social consensus is that all Ethereum PoS is where all the future developments will continue. So all of the forked assets on ETHW would likely be worthless. But “never let a good crisis go to waste” said Winston Churchill. The merge will present exploitable trades. In any event, value is in the ‘eye of the beholder’ meaning that the uninformed and newcomers may not easily distinguish between a PoW Bored Ape and a PoS Bored Ape. There will be a defacto complete copy of wallets, positions and assets meaning creating credible ‘fakes’ will be easier. A common belief is that advanced traders will try to liquidate their DeFi positions and assets by trading these worthless tokens for ETHW and will rush to sell the ETHW on exchanges. But who will buy these? More importantly what will they do with them once they have purchased the lesser versions? Remember, there is a speculative market established around ETHW at the moment there is a price attached. When Poloniex first listed ETHW in early August the price went up as high as $141.36. The price has come down since and ETHW is currently priced at around $50 which is about 3% of the price of ETH. When ETC was forked, in the immediate aftermath, the ETC to ETH conversion rate peaked at 3.03ETH before falling! Although ETH PoW will be a short-term game, there will definitely be savvy traders who will take the juice out of it.

But in the process of offloading free ETHW, scammers could execute replay attacks. A replay attack allows a transaction on one chain to be “replayed” on another chain. The replay attack not only concerns ETHW but all types of assets like NFTs, too. To play with PoW, using another wallet for PoW is recommended to safeguard your assets.

Nobody perfectly knows what’s going to exactly happen during the Merge or whether the hard fork would go through or not. Even if it goes through, there is a slim chance that Ethereum PoW would garner wide community’s support. However, a few big hands can definitely cause temporary chaos. As our CEO Toby Lewis said in Bloomberg “it’s going to be a bumpy ride.”

So, make your choices on what to do with your assets, grab some popcorn and sit tight for the biggest blockchain event so far this decade.