NFTs: Minting the Future of Finance

Over the course of 2020 and 2021, interest in Non-Fungible Tokens has surged massively. They provide creators a means of commodifying art, music and games against a backdrop of international lockdowns restricting normal revenue streams. Contrary to popular belief, NFT’s have in fact been a component of the DeFi world for quite some time. Ethereum’s EIP-721 allowed for token-games such as Dapper Lab’s ‘Crypto Kitties’ to function back in 2018. In fact, as far back as 2014 the concept of ownership for unique blockchain tokens representing artwork existed - albeit under the different umbrella term of ‘monetised graphics’.

Only recently have NFT's been exploding into mainstream view. Artwork-collectables such as Satoshibles, Cryptopunks and Bored Ape Yacht Club have all reaped the rewards of the increasingly profitable scene. It is not uncommon for variations of the above to be traded for millions of dollars each. Their newfound popularity is now so great that even with the passing of the pandemic and the resumption of many normal revenue streams, it looks like NFTs are here to stay. Let’s explore the current state of the space and how NFTs have secured their position in DeFi-functionality.

The Secret of Scarcity Value 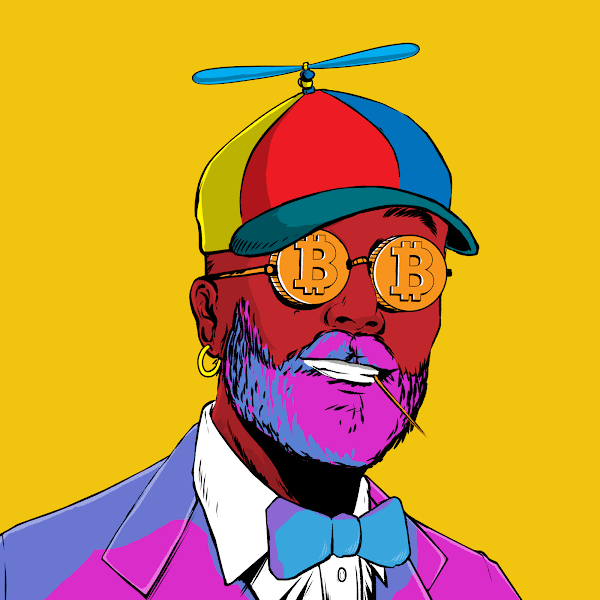 It is impossible to discuss NFTs without mentioning their valuations. The value of an NFT is dictated by various factors including the clout of its creator and the nature of the NFT itself, but a significant factor in the valuation is the token’s scarcity. In the case of artwork-collectables, a limited number of tokens are minted. Some of the most popular tokens such as Crypto Punks and Satoshables have only 10,000 and 5000 tokens in existence respectively. The key to high valuations is to have sufficient supply to allow the tokens to circulate widely - but also adequate scarcity for onlookers to fear missing out on the fun.

‘Hype’ also plays a significant role in the price of an NFT transfer. Viral social media posts attract curious bystanders which then creates demand and in turn increases the theoretical value of a given token. The ‘attributes’ of a given collectable do not actually add to its inherent value - it has all the same properties of a less valuable token in the same collection. However the excitement of owning a rare token with less common traits can result in frantic trading in the hunt for a more highly-valued variation.

Ethereum’s EIP-721 proposed in 2018 allowed for ‘proof of ownership’ for tokens and permissioned transfer of ownership. Similarly to how ERC-20 facilitated ICOs (Initial Coin Offerings), EIP-721 largely facilitated the existence of the NFT space on Ethereum today. However, despite constituting the largest portion of the market by far, Ethereum is not the only blockchain facilitating the NFT space. Solana, Stacks and Tezos all support NFTs with some blockchains such as Flow designed specifically for their creation and sale. 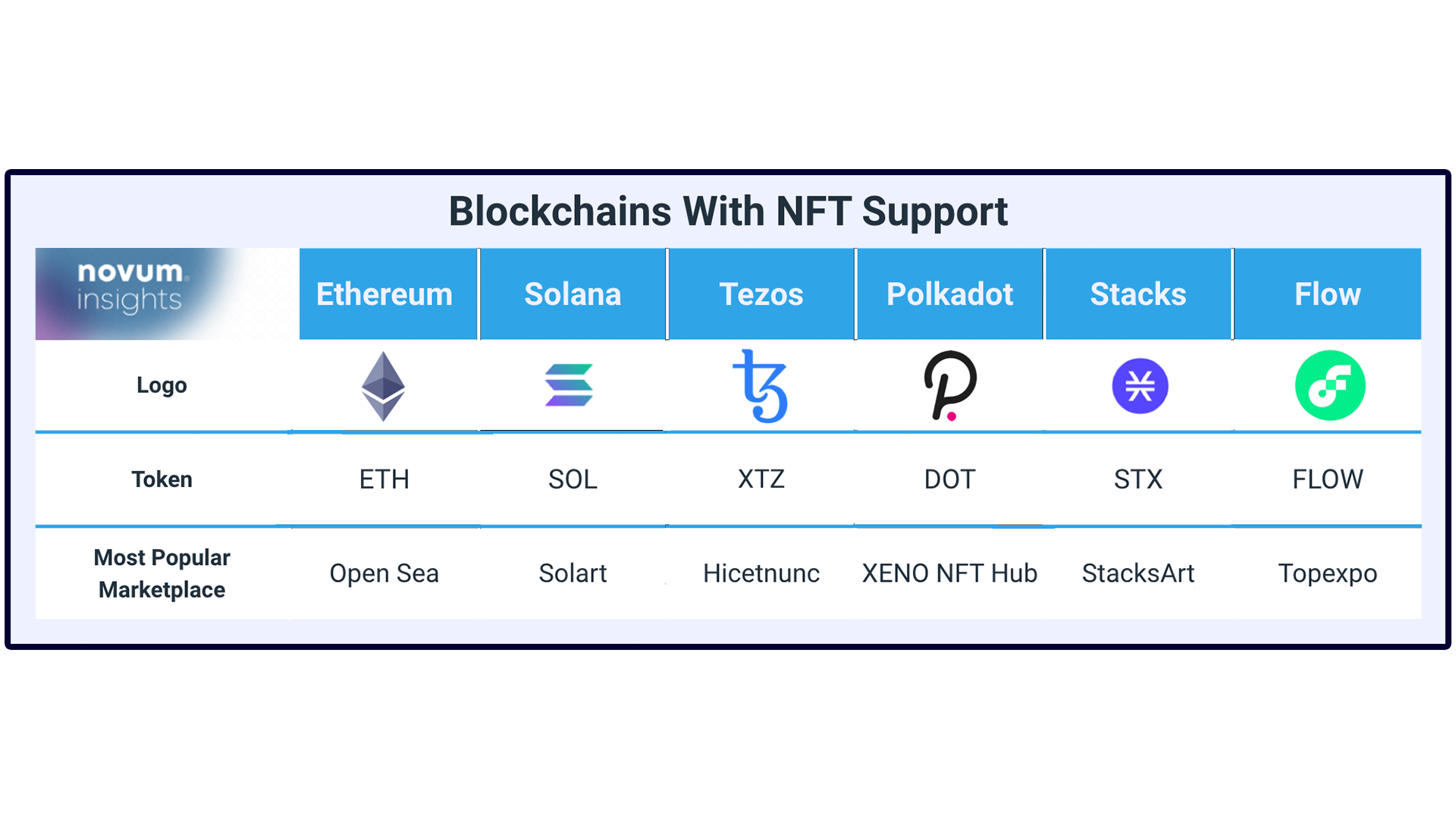 If Ethereum can be considered the ‘mainstream’ blockchain for NFT creation, distribution and sale - Open Sea can be considered the accessible face of NFT marketplaces. It functions as an eBay-style interface for minting and bidding on NFTs. Although hundreds of different marketplaces exist - each allowing different tokens to be used for their purchase with variations in platform-fee models therein. Concern surrounding oversaturation causes some marketplaces to be exclusive to invitees, but others allow any creators and traders to use their platform. 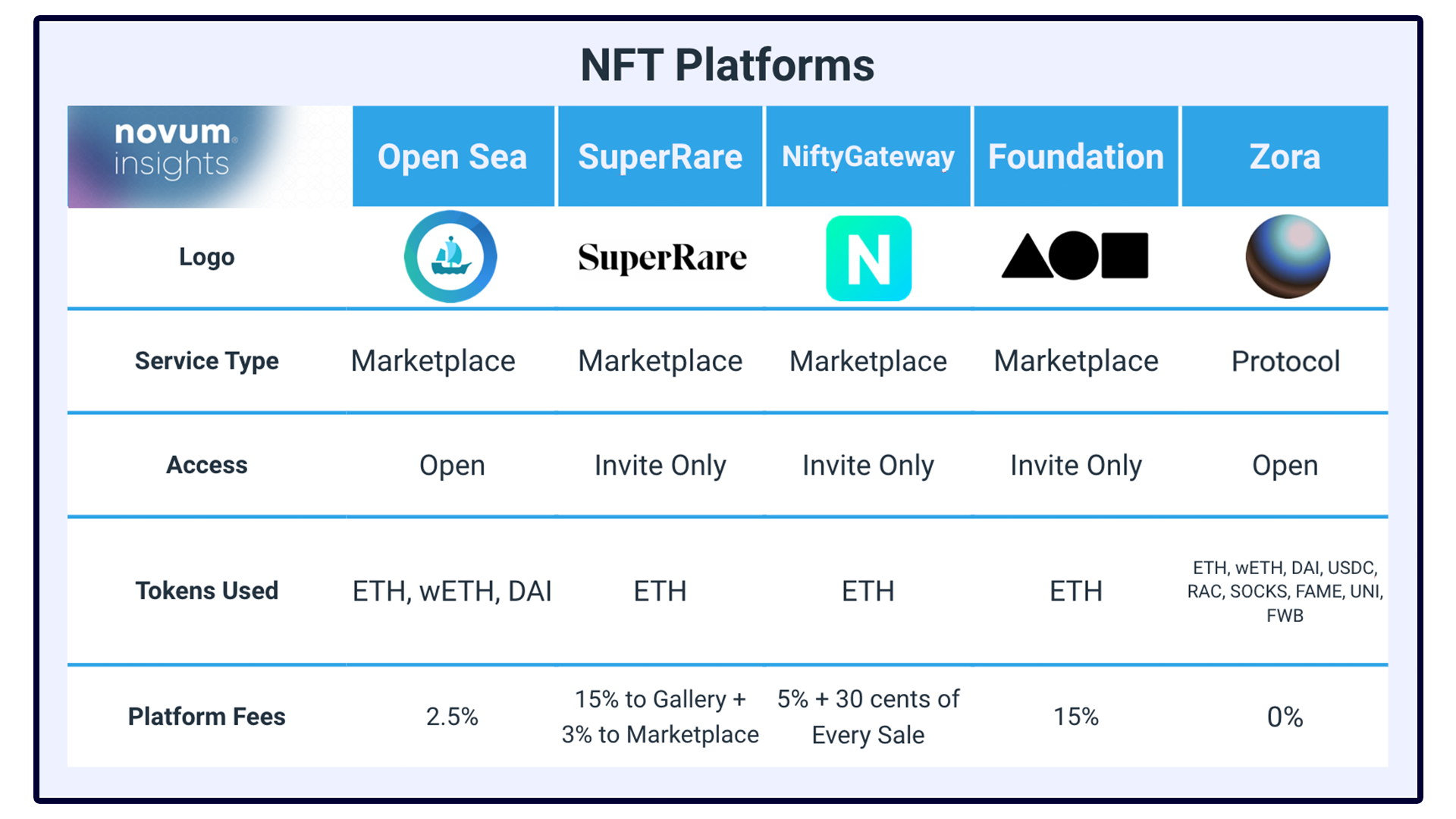 Some layer-1 blockchains such as Avalanche(AVAX) now offer wallet services that allow users to mint and exchange tokens without ever leaving the wallet interface. It’s worth noting however that the image itself does not actually reside on the blockchain - its unique token instead simply refers to the image somewhere on the web. This is quite surprising and potentially concerning - considering that almost all of the value attributed to the token is associated with the artwork itself. It is up to the platform on which the collection resides to ordain which token refers to which art piece. 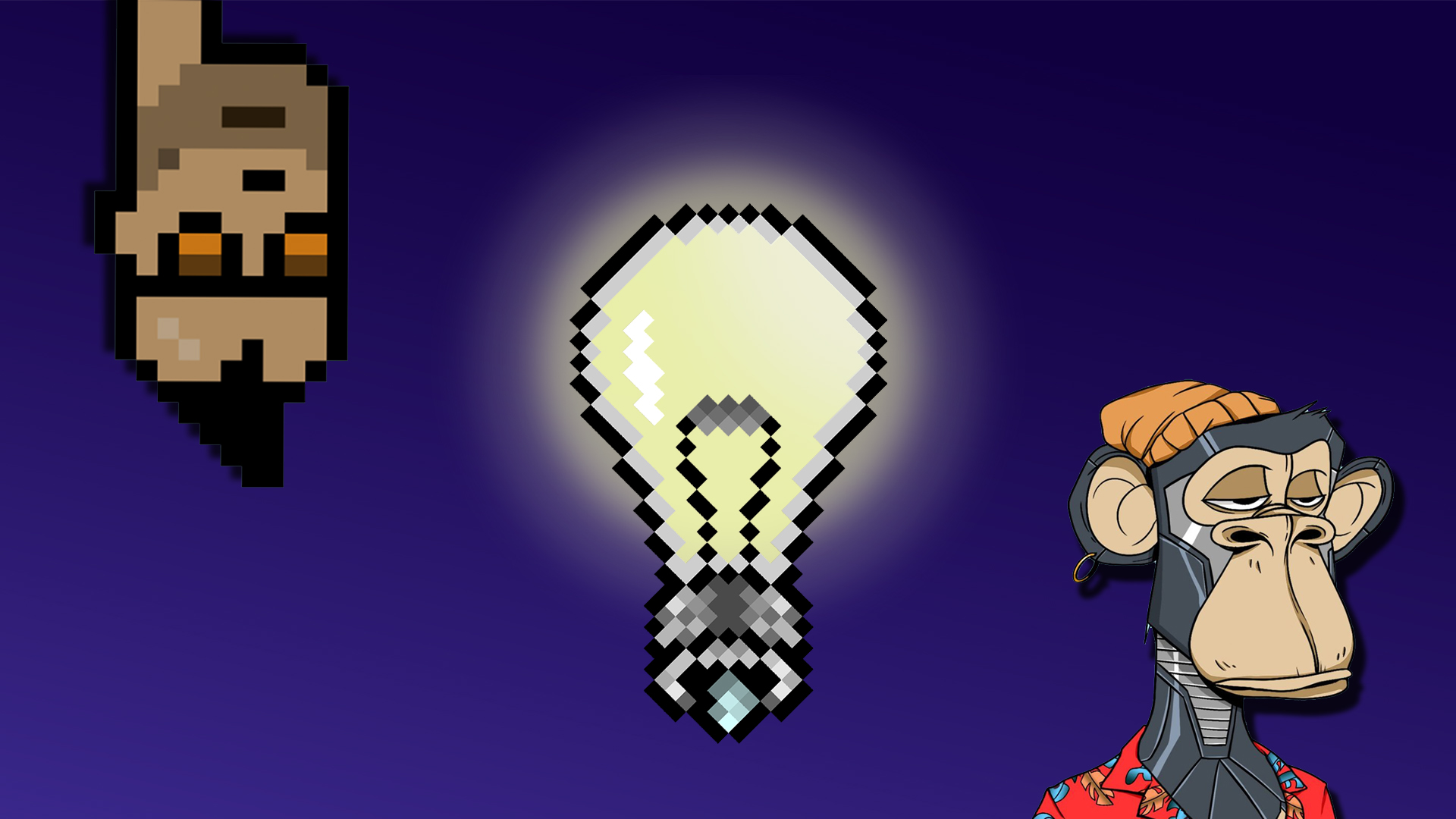 The excitement of artwork-collectables being sold for several million dollars each is difficult to deny, but the value of the concept of non-fungible tokens and its potential for finance goes far beyond simple content-sales. Proof of ownership technology facilitated by EIP-721 has the potential to benefit a multitude of financial processes. Property sales might be carried out via token transfer, with ownership verifiable by the same process. Companies such as Mattereum are pioneering the use of NFTs for proof of ownership for physical assets - allowing the token to represent said assets. Protocols like Unlock use NFT proof of ownership as a verification method for content access-rights and facilitate blockchain-based subscription models.

Additionally, the possibility of Ethereum’s ERC-1155 allowing for token ‘semi-fungibility’ has not yet fully been explored. Proportioned proof of ownership for property, physicals or collectables could provide both immense convenience and innovation to respective fields. We are likely only at the tip of the iceberg with regard to the ‘non-fungible revolution’ for DeFi. One thing known for certain however is that the NFT space can be expected to continue to evolve over the coming months and years.

Find out more about NFTs and deploying capital in the crypto space at https://novuminsights.com/