We started the weekly emerging tokens six months ago and we have featured over 70 projects of different stages in development. This week, we highlight 5 projects that have done well in the past week. 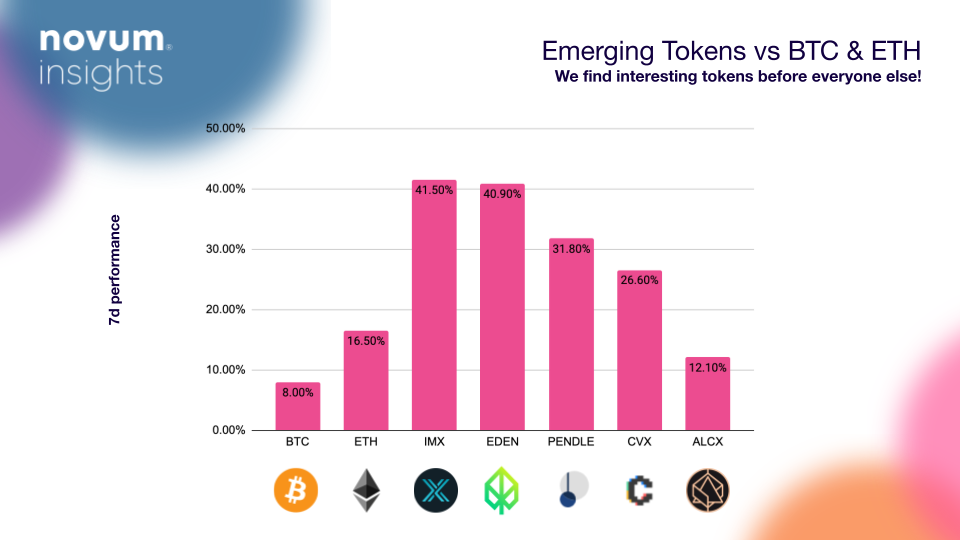 Immutable X is a layer 2 Ethereum solution for NFTs using Starkware’s ZK rollup. IMX performed really well having registered a gain over 40% in the past 7 days. This rally came after the news that the company had raised $200 million in funding at a $2.5 billion valuation from notable institutional investors such as Temasek, Tencent, Animoca Brands, Almeda Research and Fabric Ventures. Another round of recent price jump came after GameStop mentioned that the company intends to launch the NFT marketplace in partnership with Immutable X by the end of July. This caused the RSI and RVI to move up to 63 and 58 respectively. IMX has a total supply of 2 billion and only 12% are currently circulating. IMX’s market capitalization stands at $547 million and it is now trading at $2.32. This is still down 75% from its ATH. When GameStop first unveiled its rumored partner of the NFT marketplace back in February, IMX hit $4.

Founded by James and Robbie Ferguson (both Forbes 30 under 30), Immutable X is powering leading blockchain gaming projects including Gods Unchained, RTFKT, Guild of Guardians and Illuvium. Immutable X supports up to 9000 transactions per second and users pay zero gas. This has been made possible by having Ethereum key sign transactions batched into a compressed validity proof. Immutable X also aims to be carbon neutral as the team claim they will buy carbon credits to offset the carbon footprint of each and every NFT minted or traded on Immutable X.

Alchemix is a DeFi protocol that lets users take out loans that repay themselves over time. This is made possible by leveraging synthetic assets that represent the future yield of a deposit. Alchemix currently supports alUSD and alETH. Alchemix rolled out V2 a week ago and the price of ALCX increased by 12% since the launch of V2. In V1, alUSD could be minted upon depositing DAI with a collateralization ratio of 200$, in V2, alUSD receives more collateral types such as USDC and USDT. alETH can be minted upon depositing ETH with a collateralization ratio of 400%. Deposited collateral assets are deployed to Yearn Finance to earn yields that will automatically pay down the debt. As Alchemix relies on earning yields from colletarl, it does not force liquidations.

There is more than $720 million in total value locked in Alchemix, $126.6 million in market cap and 11.9 k unique addresses holding ALCX. ALCX has just started to show a positive volatility for trading and the RSI of ALCX is still relatively low at 44. The current circulating supply of ALCX is 1.2 million. There is no hard cap of total supply and the estimated token supply in circulation after 3 years is 2,393,060 ALCX tokens. After that, there will be 4.5% annual inflation to gradually decrease over time. 80% of the supply in the first three years is allocated to staking and LP rewards. You can also buy ALCX at a discount using Olympus Pro. Read our previous post on Olympus DAO to learn more about how Olympus Pro enables discounted token purchases.

Eden Network is a transaction ordering protocol for Ethereum that protects users from frontrunning. Formerly known as Archer DAO, the rebrand took place in August 2021. Eden Network users can stake EDEN in order to submit private transactions and obtain guarantee placement within blocks. Eden Network introduces additional transaction ordering rules, and a new class of transaction created by Eden that gets priority above all other transactions in Eden is Slot Tenants. In order to become Slot Tenants, users must stake EDEN. Slots can be rented all the time via a continuous auction mechanism. Eden integrated with Sushiswap to protect traders and Floor DAO, an NFT market making protocol, is using Eden to prevent frontrunning.

Eden Network is entering the realm of PoS multichain and its first destination is Avalanche. Leveraging its expertise in infrastructure tooling, Eden Network will play a part in AVAX liquid staking. In partnership with Yield Yak and Geode, Eden Network will be responsible for running validator nodes using staked AVAX via the Yield Yak platform.

The total supply of EDEN is set at 250 million EDEN, and monthly inflation is distributed to block producers (60%), liquidity providers (30%), and Eden treasury (10%). EDEN logged a 40% return in the past 7 days and this pushed the RSI to go up over 60. Despite its recent spike, EDEN is still trading 95% below its ATH hit when they announced they had raised $17 million. EDEN could be an interesting project to look at as it diversifies its partnerships in MEV protection on Ethereum and its offerings in PoS chains.

Running on Avalanche and Ethereum, Pendle allows users to tokenize future yield. Users deposit yield generating assets and they are divided into Ownership Tokens (OT) that represent the principle and Yield Tokens (YT) that represent the right to earn interest in supported yield markets. OTs are locked until the maturity date and YTs are free to be deployed anytime upon mint to 1) be sold for cash upfront or 2) be deposited into Pendle’s AMM and earn LP rewards. Traders who want an exposure to yield only can buy YTs directly using Pendle’s AMM. Pendle’s AMM is designed in a way that the curve is shifted to minimize impermanent loss, reflecting the fact that YTs decrease in value as the maturity date approaches (because there is less time to generate yield). Pendle currently uses Redacted Cartel, SushiSwap, Compound, Aave as yield generating protocols on Ethereum and Trader Joe and Benqi on Avalanche. Pendle charges a 3% fee of the interest accrued from YTs. Pendle AMM also charges a 1% swap fee and 0.85% is distributed to LPs. Pendle is gearing up for a V2 update and added utility for the PENDLE token.

PENDLE had a great run in the past week logging in a price increase of 32%. While the RVI started to show a positive trading signal yesterday, the RSI is still relatively low at 45. Pendle’s market capitalization is at $15 million and PENDLE is currently trading at $0.16, 95% below its ATH.

Convex Finance is a CRV rewards booster. To understand Convex Finance and the “bribing” phenomenon in DeFi, a quick recap of Curve Wars is necessary. Curve introduced the veCRV (vested CRV) and let the veCRV holders vote on Curve gauge weights. This means that they can redirect CRV emissions towards their desired pools and LPs in those pools can thus receive boosted rewards.

Convex Finance is the most influential platform that is built on top of this trend. Convex Finance distributed more than $420 million since launch in spring 2021. Via Convex, CRV holders can stake CRV. Pooled CRV is then converted to veCRV for boosted rewards. CRV stakers receive a share of boosted rewards, and CRV LP token stakers on Convex are eligible for trading fees and boosted rewards. This can be understood as “bribing” because Convex obtains influence over CRV emissions by helping users earn higher yields.

Convex Finance’s CVX token can also earn a share of boosted CRV rewards via staking. The total supply of CVX is capped at 100 million, and 50% is allocated to pay out CRV LP rewards and 25% is allocated to liquidity mining. 55% of the total supply is currently circulating. Convex charges a 16% performance fee on CRV revenues. CVX is available at major exchanges such as Binance, Gate.io, Sushiswap, Uniswap, Huobi and will be listed on Kucoin today. As the Curve Wars intensified, CVX price more than doubled in December 2021 and hit the ATH of $62.69. Earlier in this month, a bug in the vote-locked CVX contract was discovered and this caused the price of CVX to tank. The contract was redeployed after the discovery.

Convex contributed to the growing ecosystem of Curve, opening the next chapter in DeFi and popularized the “bribing” model. However, much concern is voiced about this trend because gaining monopoly over a project’s governance is the farthest thing from decentralization.

Written by Jessica Kang for Novum Insights.
The Emerging Tokens Alert and the Novum Blog are based on entirely estimated historical returns which provide no guarantee, promise or calculation of potential future returns or losses. In addition, all of the assets displayed and shown on the website are highly volatile and risky.