The bear market continues in the cold winter. The market hibernates and Bitcoin and Ethereum decreased by 14% and 24% respectively in the past week. Many projects are down along the market conditions. One good news is that ICHI, a project featured last week has shown an impressive 48% increase in the past 7 days! Read the post here.

In bear markets, we should keep an eye on infrastructure projects that are quietly developing to disrupt how the web functions when the time comes. Scalability and MEV protection are big hurdles faced by the users, and the nascent metaverse space is currently under development. We also look at DAO-led investment initiatives. 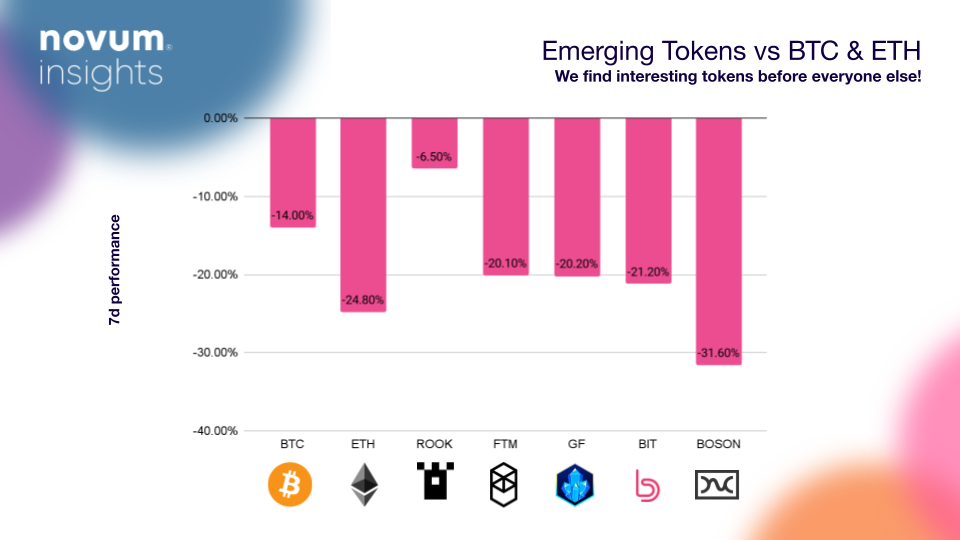 The GuildFi Platform looks to use the funds to develop features including: GuildFi ID which is a metaverse ID that tracks players’ achievement across the metaverse, game discovery, scholarship programmes, and a launchpad called “Metadrop” where the users allocation for special NFT deals is determined by the users’ ranks. Currently running NFT drops on GuildFi are Sipher.xyz’s Sipher Box, GuildFi’s mystery Box for selected genesis members. GuildFi’s partnerships include the famous Axie Infinity, a football themed game CyBall, a mafia-themed metaverse Syn City which had one of the most successful IGOs, a racing game Pegaxy and more.

GuildFi’s native token is GF has multiple benefits: 1)GF accrues value as revenues are generated from P2E games, guilds and scholarship programmes, NFT sales and lending. 2) You can become a GuildFi DAO member by staking GF. More than $33 million worth of GF has been staked so far and the current APY is at 392.55% (variable). 60 million GF tokens are allocated as staking rewards and 5.6 million GF tokens have been distributed so far. GF’s token launch auction took place on Copperlaunch in early December last year and it raised $139 million. The starting price of GF was set at $1, and the price at the end of the auction stood at $4.0342. Since then, it has come down to $1.49.

Given GuildFi has reputable seed investors on its back and that combined with juicy staking returns, investing in guilds like GuildFi could be an efficient way to invest in the general metaverse scene while many of the “promising” metaverse projects are under development.

KeeperDAO is a MEV(miner extractable value) protection protocol. More than $900 million has been extracted from the users using methods like front-running and sandwiching trades. DeFi is now a $92 billion market and it is important to address MEV. KeeperDAO’s trading application allows users to place limit orders that are protected from MEV bots, free of gas. In KeeperDAO, a network of Keepers monitors blockchains to capture on-chain profits in the form of arbitrage or liquidation. KeeperDAO recently partnered with a backstop liquidity protocol B.Protocol to add an MEV protection layer to DeFi lending liquidations.

In KeeperDAO, Keepers source liquidity from diverse sources including market makers, DEXes, CEXes, OTC markets. Trades executed by the KeeperDAO network outperforms user-settled trades. Then, the profit earned flows back to the users in the form of ROOK tokens. In KeeperDAO, Keepers coordinate, rather than fight gas wars, take turns to capture profit and redistribute. It resulted in $1.7 million in gas savings. 80% of the MEV profit is distributed to the users and market makers, 4% is burned, 6% goes to the DAO and 10% goes to ROOk stakers. The maximum supply of ROOK is capped at 1.5 million. To see a detailed overview of the ROOK emission schedule, see here. Of 1.5 million, 1.2 million ROOKs have been minted so far and half of the minted supply are currently circulating. ROOK is currently trading at $98.37, 88% below its ATH hit about a year ago. ROOK is also at its lowest price range since 2021. The RSI at 37 and the RVI of 28 indicates that the volatility is yet to send a positive trading signal.

Fantom is a layer 1 blockchain whose transaction recently surpassed that of Ethereum’s. Fantom also surpassed Avalanche, Solana and BSC in terms of TVL. This is due to a surge in Fantom based DeFi projects. The trading volume of Fantom DEX SpookySwap exceeds well known AMM DEXes including Sushiswap, Raydium, Quickswap and 1inch. Aave’s fork Geist amassed $982 million in TVL. This cannot compare with Aave’s current $20 billion liquidity, but Geist offers higher deposit APYs than Aave does. Hypes around Andre Cronje’s new project dubbed ve(3,3), launching on Fantom have also pulled over liquidity to Fantom.

Fantom’s native token FTM has given investors a 100x return in 2021. Fantom is currently trading at $2.34, up 20% in the past 24h alone. FTM reached its ATH in October 2021 and is currently below 31% of its ATH. FTM is yet to hit RSI of 50 and RVI is about to show a positive volatility. It might not be the perfect time to invest in FTM in terms of price, however, it is definitely worth keeping track of new DeFi projects launching on Fantom and whether Fantom can exceed other chains in various metrics like TVL, number of transactions etc.

Boson Protocol addresses the gap between physical commerce and metaverse commerce. The protocol can be understood as an interface between those two. Boson Protocol allows any item shoppable on metaverse to be redeemed in the physical world. Rather than tokenizing the product itself, Boson uses NFT vouchers that represent a promise that a digital value purchased online / metaverse will be exchanged for a physical good or service. This exchange is secured by double-sided deposits in a way that this mechanism incentivizes buyers and sellers to act with honesty.

Boson’s governance token BOSON has a total supply of 200 million, and currently 33% are circulating. 43.4% of the total supply is allocated for community rewards. Fuelled by the metaverse boom following Facebook (now Meta Platforms), the price of BOSON more than doubled in between late October and mid-November when it reached $4.13. Since then, the market started to correct and it was followed by the general crypto bear market. It is now trading at $0.83 and BOSON’s IDO price back in April 2021 was $0.75. It could be a good moment for investors looking to invest in the metaverse.

One of the recent proposals addresses the scalability issue in Ethereum and proposes to commit $200 million for the zkSync ecosystem accelerator. The proposal is live and ends in two days. Edu DAO has been formed funded by BitDAO’s treasury. It is a multi-university DAO that will address blockchain research and education. Participating universities include world leading Harvard, MIT, Oxford, Tsinghua and more. BitDAO is supported by Peter Thiel, Pantera, Dragonfly, Bybit and more. Bybit has pledged to make recurring contributions of 2.5bps of futures trading volume to the BitDAO treasury.

BitDAO has a total supply of 10 billion BIT tokens and almost 16k addresses are holding BIT tokens on Ethereum. The trading volume of BIT increased by 36% in the past 24 hours. BICO logged a 21% loss in the past 7 days along with the wider market. If you want to share BitDAO’s mission and are interested in funding new projects that will shape the future of web3, this is not a bad moment to buy BIT.